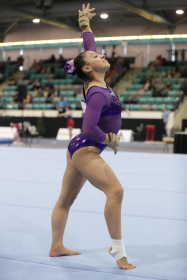 Southeast coach Ashley Lawson announced the signing of three gymnasts for the 2020 season on Nov. 14.

Next fall Dahlia Solorzano-Caruso, Jordan Jones and Mallory Desch will join the team as freshmen for practices prior to the 2020 season. 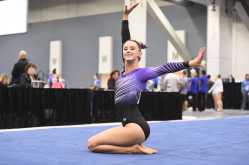 Mallory Desch finishes her routine during a meet in 2018.
Submitted photo by Mallory Desch

Desch comes from Lenexa, Kansas, where she was a Junior Olympics national qualifier the past two years. She captured first place in the Level 9 Region 4 Championships and qualified for the Level 9 Western Championships in 2016. Lawson said she expects Desch to make an immediate impact on bars, beam and floor.

Jones hails from Buford, Georgia, and was the Georgia Level 10 bars state champion in 2017. 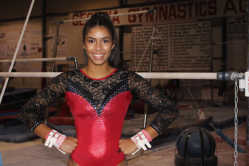 Jordan Jones poses for a photo in her home gym.
Submitted by Jordan Jones

In 2016, she placed second in both vault and floor for Level 10 at the state level and won the Level 10 vault state championship in 2015.She also qualified for Junior Olympic Nationals, where she placed 12th in the all-around competition in 2015. Lawson said she hopes to see Jones impact the beam and floor lineups, and may even look for her to take spots on vault and bars.

Although these new additions will not get their start until 2020, this year’s team opens its season in January. The Redhawks will head to Tuscaloosa, Alabama, on Jan. 4 against Northern Illinois, Alabama and Temple.