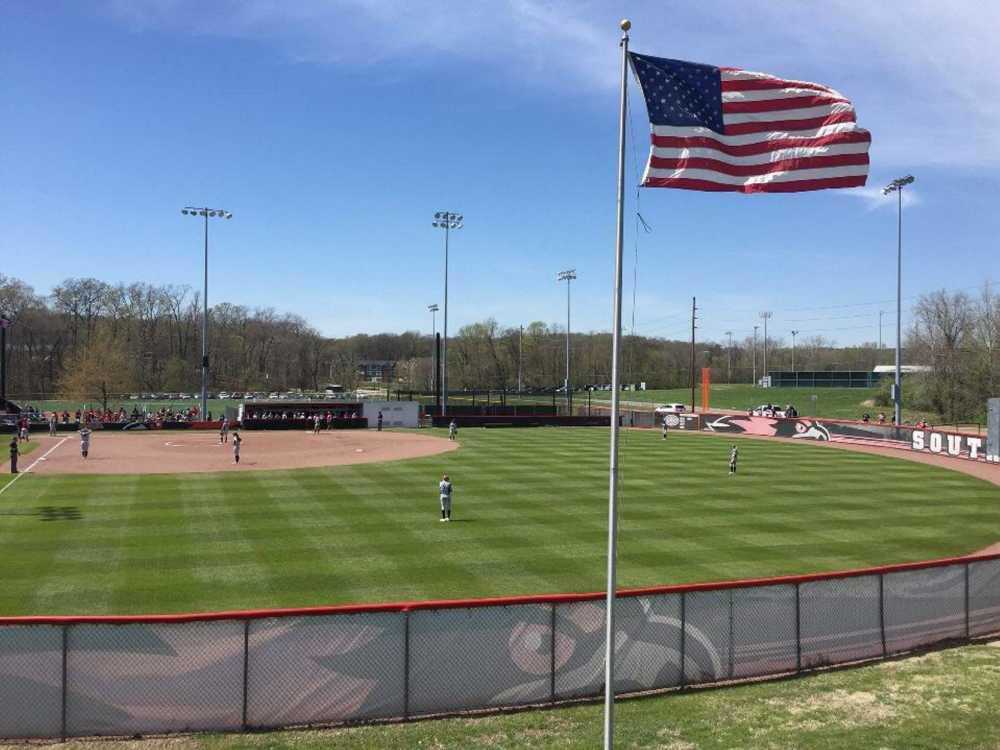 The American flag overlooks the Southeast Softball Complex on a clear day in 2017.
File photo

Southeast’s 2018 softball season raised hope and expectations for the program as the team finished with its most wins in 20 years.

Three of the five seniors on the team have been with the Redhawks and coach Mark Redburn since their freshman year, and the team’s turnaround can be linked to the team atmosphere of buying in.

“They really kind of set the tone within our program,” Redburn said. “That senior class — and some of the juniors — set the tone and play at a high level and have high expectations for success.”

That core group of seniors — pitcher Haley Thogmartin, infielder Mackenzie Long and shortstop Sarah Messex — were a key to earning the program’s first winning season in seven years as the Redhawks finished 33-20 and 15-7 in the Ohio Valley Conference, good for fourth place.

“As a coach, it’s really good to see when your older players are kind of taking charge and taking lead,” Redburn said.

Messex has not missed a game at Southeast, starting all 152 games since she was a freshman.

“She gives it everything she’s got every day,” Redburn said of Messex. “To learn how to play [shortstop] as effectively and as good as she’s been able to do it, that’s a tribute to her. She’s definitely one of our leaders as well, and she’s a kid that has always worked to get better.”

Messex played the majority of her time as catcher in high school but changed positions when she arrive at Southeast and adapted quickly.

The Redhawks’ shortstop earned second-team all-OVC in 2018, improving in the field and at the plate. She led the team with eight home runs and 37 RBIs. Her fielding percentage improve from .881 her sophomore year to .958 as a junior, when she committed seven errors.

Junior center fielder Rachel Anderson has a similar start streak as Messex, having yet to miss a start in 102 games.

“She practices the same exact way she plays games,” Redburn said. “I think she’s come in right away from day one and helped set that tone of what we want. Other players are seeing it and are challenged by it and they compete with that. That’s a big reason why we’ve been so successful. There’s not very many center fielders that are better than her.”

The Redhawks bullpen remained mostly intact besides the graduation of Madeline Krumrey. Among the returning pitchers are junior Alexis Estes, sophomores Rachel Rook and Kaylee Anderson and Thogmartin, the team’s No. 1 option. Freshman Marisa Davis has been added to the mix.

“We’ve got five pitchers that can throw, and we’ve got different looks and different velocities. I feel like we’re really deep,” Redburn said. “Haley Thogmartin was really probably our best pitcher going down the stretch last year. Rachel Rook was our closer, and that’s usually unheard of as a freshman, but she was really able to not get caught up in the pressure.”

The Redhawks have been picked to finish fifth in the preseason OVC poll.

The Redhawks kick off their season Feb. 6 in the Ramada Uni Dome Classic in Cedar Falls, Iowa, where they will face South Dakota State, Northern Iowa, Toledo and Drake.