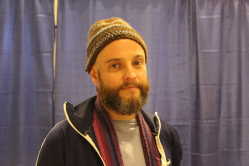 On Feb. 5 Joshua Newth, instructor and interim foundations coordinator of Southeast’s Department of Art and Design discussed a time in Britain’s art history where dead animals, human blood, and references to human genitalia were used to create art at the Crisp Museum on Southeast’s River Campus.

Newth’s talk, “The Young British Artists: Transcending the Object” was part of a History Tuesday Talk series that focused on art movements throughout time. He spoke specifically about the Young British Artist Movement, also known as the YBA Movement, which Newth explained in his talk is known for its shocking art and use of unconventional mediums.

“I thought it would be a unique opportunity,” Newth said. “I have a little bit of familiarity with the Young British Artists, but it doesn’t extend as deep into the individual artists.”

Newth covered the background leading up to the movement and about five of the main artists who heavily influenced the movement, as well as other key players during the late 1980s to late 1990s while showing examples of each artist. Two of those being Damien Hurst and Tracey Emin.

Hurst is known for his piece “The Physical Impossibilities of Death in the Mind of Someone Living.” The piece consisted of a dead, 14-foot tiger shark suspended in a tank filled with formaldehyde.

Emin is known for her piece titled, “My Bed.” It is an installation of her bed after a bad break up, complete with an empty vodka bottle, cigarettes, feminine hygiene products, and crumpled tissues.

“I think that students don’t quite get an overall sense of what art can be,” Newth said. “I think that showing them these images and telling them a little bit of a backstory to them presents a unique opportunity for them to get a greater sense of the possibilities of art in general.”

The Crisp Musume holds History Tuesday Talks every week and for the rest of February, the topics will recognize Black History Month.