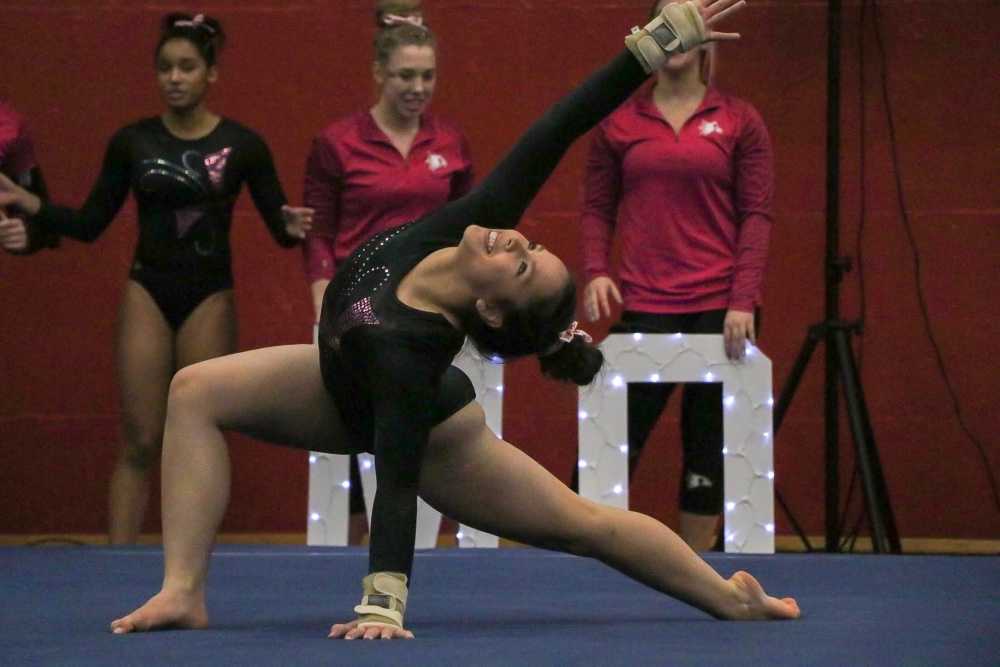 Southeast gymnastics hosted its second home meet of the season Feb. 8, with the Redhawks falling to Northern Illinois University 194.725-186.825.

Freshman Anna Kaziska continued her breakout season as she took the floor title with a score of 9.875, and won the all-around title by beating out fellow Redhawk sophomore Alana Fischer with a 38.425. Fischer finished with a 37.725.

“[Fischer] has been battling an elbow injury, so this was the first time she was able to do all-around, and she did great,” Kaziska said. “She leads the team with energy. She always pumps us all up and she’s always there when we need someone to be picked up.” 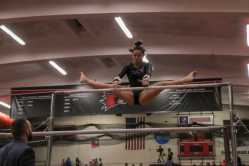 With their breadth of talent, the Huskies did not have a competitor in the all-around race as they had multiple event specialists.

After three Redhawks failed to stick their landings in the vault, the team was able to put together its third highest overall score of the season. Even with those three falls on the vault, Southeast scored a 46.375 in the event, with Kaziska taking second with a 9.675. Their total event score was thanks to Kaziska’s effort, Slee’s 9.550 and a season-high 9.525 for Fischer.

“We tell them to flip the switch,” Southeast coach Ashley Lawson said. “We have to forget about something that happened, whether it was great or something not so great. We try not to dwell on where we were and where those errors were. If they can forget about them and they can move onto the next event and do their job there, that’s anything a coach can ask of them.”

Kaziska was the leading Redhawk on the beam, where she narrowly took second with a 9.800, falling to NIU’s Mia Lord who scored a 9.850.

“Anna comes in every day and she does her job,” Lawson said. “When she comes out here she continues to do her job and that’s all we can ask of her.”

The Louisville, Kentucky, native was runner-up on the vault as well, scoring a 9.675 behind NIU’s Cinny Lamberti (9.800).

In the team’s toughest event, junior Kendra Benak was a bright spot for Southeast in the uneven bars. She led the Redhawks with a 9.525, placing sixth in the event. She was the only Southeast gymnast to score over a 9.500 as the team scored a 45.875.

Southeast scored 48.100 on floor, its highest event score of the meet. Senior Allyson Bell led off with a 9.550 in her first-floor routine in 2019. Junior Mackenzie Slee scored a 9.775, placing second for SEMO and fifth overall. Sophomore Gabrielle Adams and Fischer both tallied 9.450 scores on floor, a career-best for Fischer.

“All we want to do when we come in is have fun,” Kaziska said. “We don’t focus on scores, we don’t focus on anything else but ourselves. It’s just competing against ourselves — doing the best we can do while having fun with the crowd.”

The Redhawks will hit the road for their next pair of meets, facing Lindenwood and Texas Woman’s in the GymQuarters Mardi Gras Invitational on Feb. 15 in St. Charles, Missouri, and then heading to face Illinois-Chicago on Feb. 17.