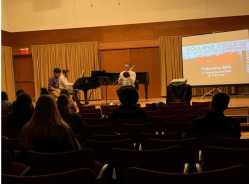 The audience swayed with the rhythms of the trombone and the melodies of the piano followed by a round of applause at the end of the piece.

A heartfelt spoken word, “Thug Life,” performed by Jay Wade spoke about the issues of being an African-American person.

In between segments, vignettes from the NABJ president Toslin Taylor, associate professor of mass media Tamara Zellars Buck, NABJ vice president Jasmine Massey, and NABJ member, Noelle Williams discussed issues of how being a black woman has affected their lives.

Another music performance by the only student representative, Anthony Shepard, was “Not My Father’s Son,” by Cyndi Lauper, which filled the room with a round of applause.

Gass explained how she thought the showcase was really touching, meaningful and interesting to see another perspective.

Ohlendorf said he didn’t know anything about the show until someone asked him to play in it.

“I wish we could do these things outside, and it sucks that we have to do them in Shuck, I know it’s cold outside, but I definitely think this is something that we should do in the community and share this stuff with people. It’s powerful, and I would like to be a part of it more,” he said.

Southeast’s Holland College of Arts and Media desires to put on showcases like this more often on Campus to educate and represent students of all backgrounds.