Senior Kaetlin Lamberson aims to lobby for the arts in Missouri 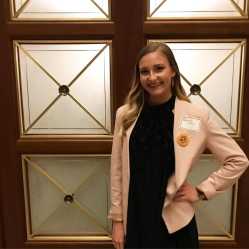 Senior Kaetlin Lamberson at this year's Citizens Day at the Missouri State Capitol in Jefferson City hosted by Missouri Citizens for the Arts.
Submitted photo

Southeast dance major and political science minor Kaetlin Lamberson has had her mind set on lobbying for the arts in government since she was a senior in high school, and her college years have been devoted to that goal.

The Poplar Bluff, Missouri, native has a passion for the arts, being that she is involved with them — Lamberson has been dancing since her days on the dance team at Poplar Bluff High School, where one of her dance instructors was a Southeast dance student. Lamberson said she would bring them to Southeast for master classes.

Southeast hosted events such as Dance Day for recruiting high school students or master classes led by guest artists that Lamberson’s instructor would bring the students to.

“That's why I chose SEMO — because I felt like I had a better understanding of the campus and I had a better relationship with some of the faculty here,” she said.

Lamberson became interested in government during her senior year of high school when she visited the Missouri Capitol in Jefferson City with some classmates. Lamberson said a group of students went with an advisor to meet lobbyists.

“It was kind of my first taste of what a lobbyist actually does,” she said.

“I thought to myself, ‘I know a lot about the arts, and I really am passionate about the arts and I think that’s something that I can so. And so from there I kind of looked into it more,” she said.

After the experience, Lamberson knew she wanted to be involved with lobbying in one way or another. She wondered how she could lobby for something she was passionate about.

Lamberson said she always knew she wanted to major in dance, but once she chose political science as a minor her mindset was to get more involved at Southeast. She is a member of Center for Strategic and International Studies, which has given her the opportunity to visit the state Capitol and shadow a lobbyist. Last spring she did an internship with Kyna Iman, a lobbyist for Missouri Citizens for the Arts.

“I got to learn more on specifically arts lobbying, and how I can impact the art world,” Lamberson said.

Iman helped Lamberson understand the duties of an art lobbyist.

“As an artist you’re able to share your story,” Lamberson said. “And so the fact that I’m an artist and I’m interested in lobbying that just allows me to not only use my art form for what I care about but also using it for the greater good and allowing it to benefit all of the arts.”

The arts have played such a huge role in Lamberson’s life, she said, and have helped her grow as a person. She said she wants the opportunity she had “to be extended to others in different communities, whether they're from a rural area, or more of an urban landscape.”

Lamberson currently serves as the Southeast regional vice president on the Missouri Citizens for the Arts board.

Lamberson said there are monthly conference calls for Missouri Citizens for the Arts, and she has to find ways to balance her time between her job duties there, Student Government Association and her class schedule.

She’s been involved with Student Government Association since her sophomore year at Southeast, where she initially served on Student Issues Committee. Lamberson is a senator for the Holland College of Arts and Media.

She wants her peers to be well informed and to ensure “everyone knows who their senators are, and what they can do for them.”

Lamberson worked with other student government senators to provide outdoor tables outside of the River Campus by the Cultural Arts Center and the Seminary Building. She also worked to get hammocks at the River Campus.

Lamberson said she wants her peers to be well informed and to ensure “that everyone knows who their senators are, and what they can do for them.”

Now she is working with the Bylaw Revision Committee in Student Government.

On Feb. 6, Lamberson and 14 other students attended Citizens Day for the Arts at the state capitol, hosted by Missouri Citizens for the Arts. The visit was organized by University Dancers United, a club she serves as president. Lamberson said Citizens Day is an art advocacy event that attracts people statewide. The students were given a briefing on what they were asking for with the budget for the Missouri Arts Council, she said.

“So then we're able to take that information and go talk to each of our legislators,” she said. “[We] kind of advocate and say, ‘This is what we do with the arts. And this is how the arts are benefiting your district and your constituents. And as constituents, we think you should support the arts and continue to support them.’”

Lamberson said the Cape Girardeau area is fortunate because legislators are “very active in the arts realm.” State Rep. Kathryn Swan has a background in music, and Lamberson also noted state Sen. Wayne Wallingford has season tickets to the River Campus.

“But it's other legislators that don't exactly see as much, but there are still events happening in their districts,” Lamberson said. “And so it's our job to reveal that for them.” 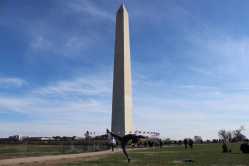 Lamberson in Washington D.C. last spring at a leadership academy with Southeast's Center for Strategic and International Studies.
Submitted photo

Lamberson will be attending the National Arts Action Summit in Washington, D.C., this month.

“We'll get a briefing on what we're supposed to advocate on and then we'll go and talk to our congressman from Missouri and advocate for the arts a national level,” she said.

“But I was able to go and talk to congressman [Jason] Smith and advocate on behalf of the arts with some other advocates that were there for that event,” she said.

Lamberson said she tries to make it clear to her peers at the River Campus that they can talk to her about student government events or issues they may have involving University Dancers United.

Lamberson said University Dancers United is a student organization that has different dance master classes to Southeast students and the community, as well as perform in the community.

“This semester I tried to be really involved with the underclassmen and helping them whenever they see something that they need,” she said.

She plans to graduate in May, then hopes to work with the Americans for the Arts, a national advocacy group. The organization offers internships that Lamberson is looking into.

“My dream job would be director of Federal Affairs with [Americans for the Arts], which would be directly working with Congress and advocating on behalf of the National Endowment for the Arts and other arts-related education, legislation and things like that,” Lamberson said.