The African Ball: A Night of Elegance 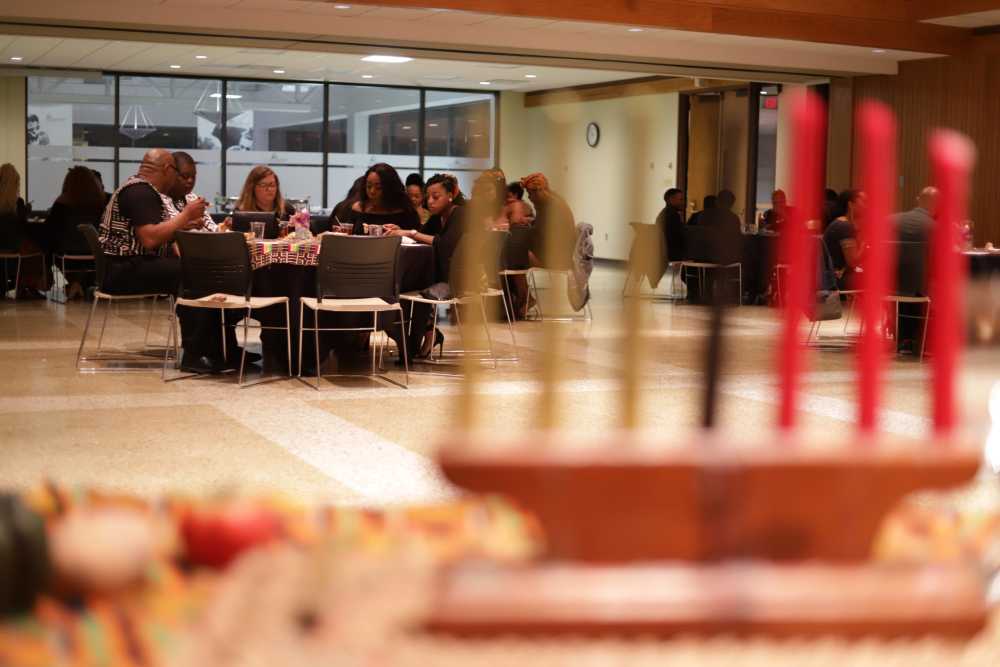 The Black Student Union (BSU) welcomed all students, faculty, and staff to celebrate black excellence, held an African Ball in University Center on Saturday, March 23, 2019. It was asked for attendees to dress in African attire or all black as they celebrated.

To put this event together, it required a lot of planning from the members of BSU.

“We just wanted something different. This was a project we started planning in the summer but previous efforts fell through,” Black Student Union president, Ke-La Harris said.

“I want everything that goes on tonight to be ingrained in you,” she said.

The BSU executive staff shared the meaning of Kwanzaa and how to properly display the candles, foods and other decorations according to their meaning in a typical household. To follow was the opening prayer by Minister Kathleen Gamble, mother of BSU vice president, Karis Gamble.

Shonta Smith gave a speech that set the tone for the evening.

“Don’t be afraid to stand in your greatness. You come from good stock. Good heritage. Each of you are great,” Smith said.

A buffet-style dinner, provided by Chartwells, was served, allowing a break for people to eat and socialize. Some attendees took pictures in front of a backdrop covered in African-style prints.

A video presentation documenting elements of the black experience was shown, titled, “Us.” A monologue was recited by Emmani Cunningham and the Southeast God’s Ensemble choir performed.

Associate professor of mass media, Dr. Tamara Zellars Buck was the keynote speaker. Her message to the attendees was thriving on campus.

“Elevate yourselves. Show you are a black intellectual. Think about how to carry yourself outside of the classroom and prepare yourself for inside the classroom,” she said.

Many of the students and faculty had similar sentiments and expectations for the event, however, many had different backgrounds.

Christine Copeland said that she initially attended because she received a free ticket from the assistant dean. “I thought it would be a great opportunity to learn and experience a part of my culture,” Copeland, who is of Haitian descent, said. “There is so much of my culture that I am hidden from because I’m adopted.”

A few members of the members of the Association of Black Journalists Southeast Chapter (ABJSE) attended the event to show solidarity with BSU, according to Noelle Williams, a Southeast student.

“I got in through ABJSE. I’m also black so I’m interested in my own culture and learn more about it. Also, it’s a black organization on campus, so me being a part of ABJSE we should support one another,” Williams said. “I’m excited to see different aspects of African culture.”

Many of the attendees that attended the event were of different backgrounds and ages, although, mostly women. Southeast student Patrick Morehouse is passionate about resetting priorities among black students.

“As one of the few men here, I want to see more men instead of the event being majority female,” Morehouse said. “There is more to college than getting drunk and partying. Instead of buying alcohol, buy a ticket to an event like this.”

“This event was not what I expected. It made me think that as black people, we downgrade each other a lot,” Southeast student Christopher Green said. “This event inspired me to be active in my community and to be a leader.”

There were many allies of a different race that attended the event.

Although the event was the first of its kind at Southeast, the members of the Black Student Union and fellow students said they hoped the event would become an annual event.