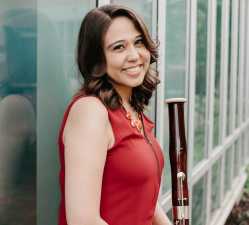 On April 7 Jacqueline Wilson, bassoonist and assistant professor of double reeds, played alongside pianist Yoko Kato in her recital called Gathering of Nations: Works for Bassoon by Native American Composers

In addition to being an accomplished musician, Wilson is someone who puts an emphasis on building a lasting and strong relationship with her music students.

Her journey in music began in Kennewick, Washington when she started playing in her high school’s band in as many students do. Her mentorship with that band director along with others throughout her education is what led her to do the same for other music students.

“My mentors invested time and resources to ensure my success above and beyond what was required of them,” Wilson said. “My doctoral mentor, Benjamin Coelho, Professor of Bassoon at the University of Iowa, is still an active part of my life. Though I graduated 8 years ago, I still seek out his advice and perspective on important decisions. His mentorship has been invaluable to me personally and professionally.”

She also said she felt attracted to the idea of helping students through what can be a difficult transition in their lives.

“That transition between leaving home and being independent can be a hard one that I thought I was uniquely suited to navigate,” Wilson said. “I really try to remember what growing pains I experienced in college and initiate discussions with my students are how they are coping with them, providing resources when necessary. I also try to always emphasize that it's not only important to transition smoothly into college but also to transition smoothly out of college and into their career.”

Beside just being a music professor, Wilson has written several educational articles that have been published. She has also been invited a few times to play at the International Double Reed Society Conference and has been invited back to play again this summer at the University of South Florida in Tampa where the conference will be held.

“Anytime that your peer group says, ‘Yes we want that person to participate,’ is a big deal,” Wilson said.

Her proudest accomplishment yet is being on the competition committee for the Meg Quigley Vivaldi Bassoon Competition and Symposium, a competition only for women of the Americas. This year the competition was held at the Colburn School in Los Angeles, California. 2019 was the first year for Wilson to be on the committee along with three others.

“The whole idea behind it is creating opportunities for women in classical music — which has typically been a male-dominated field — and having this environment of empowerment,” Wilson said.

“For me and for many other people of color in classical music, one strategy or way of navigating our identity is to bring that identity into the music,” Wilson said. “So I perform a lot of works by Native American composers. I'll continue to play this music and work with these composers for the rest of my life.”