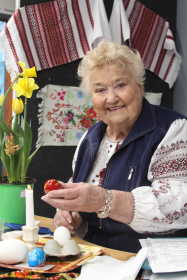 Former Southeast education professor Barb Duncan putting the final touches on her egg at her Ukranian egg decorating class held on April 9 and 10 in the Crisp Museum at the River Campus.
Photos by Katya Chronister ~ Arrow Reporter

Former Southeast education professor Barb Duncan taught classes April 9 and 10 on the tradition of Ukrainian egg decorating, Pysanky, at the Crisp Museum on the River Campus.

Pysanky is the process of decorating hollowed eggs with beeswax and dye while using ancient Ukrainian art symbols.

Duncan began the class by going through a PowerPoint presentation to cover the steps they would be doing. She then gave out all the necessary tools for the project. 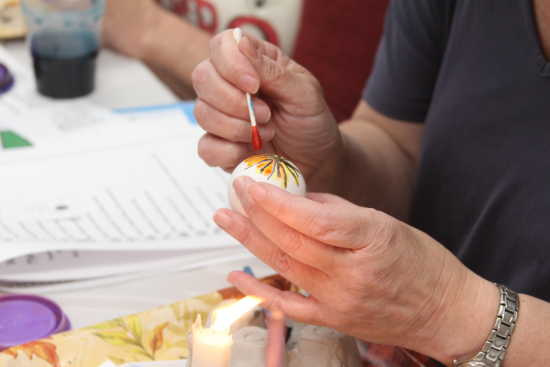 A moment from the Ukrainian egg decorating class held on April 9 and 10 at the Crisp Museum at the River Campus.
Photos by Katya Chronister ~ Arrow Reporter

“Everything represents something. Every color, every little design, every picture has a meaning,” Duncan said. “Like if you have a friend that is a gardener, you might create one with flowers and give it to them as a gift.”

Joy Adams, an attendee, said after seeing the different designs of the eggs in an add for the event she decided she wanted to learn how to do it. 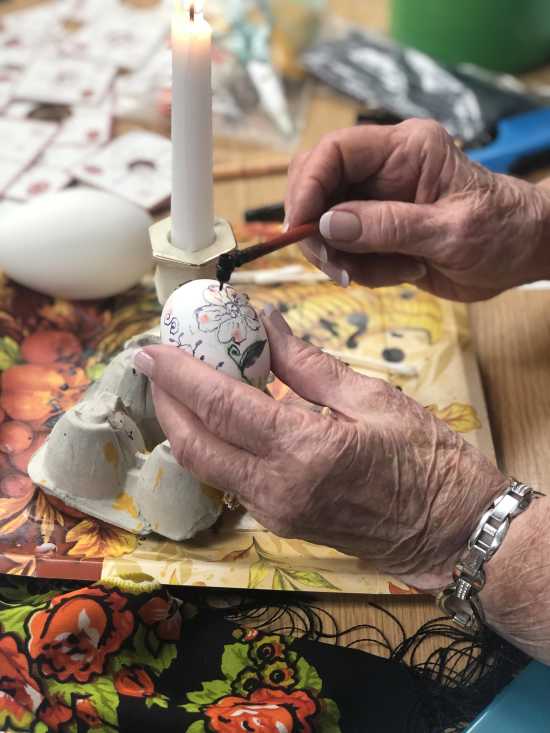 Former Southeast education professor Barb Duncan working on decorating an egg at the Ukrainian egg decorating class she taught on April 9 and 10 at the Crisp Museum on the River Campus.
Photos by Katya Chronister ~ Arrow Reporter

“I had seen some of the eggs and thought they were so beautiful. I wanted to make an attempt to do them,” Adams said. “The camaraderie though and being here with all these great people have been my favorite part.”

Some people though, like Mary Yaremko another attendee, were there because they wanted to learn something that is a part of their heritage.

“It’s part of my culture, but I never learned how to do it. My brother does it beautifully, so I’d thought I’d give it a try,” Yaremko said.

Yaremko also said drawing the design you want on the egg was the most difficult part for her.

Duncan has been teaching Pysanky since her trip to Ukraine in 1993 where she met women who taught her the art.

“I loved my trip. I met the Babushka grandmas then and they are so sweet, kind, and generous people. I was teaching sixth grade at Chaffee at the time so I also took my students’ names over and started a pen pal group with students from the Ukraine,” Duncan said.

“Art is great because you can express yourself,” Duncan said. “Other people may not know what you painted and it means a lot to you and I like to get people to learn what they didn’t know how to do.”