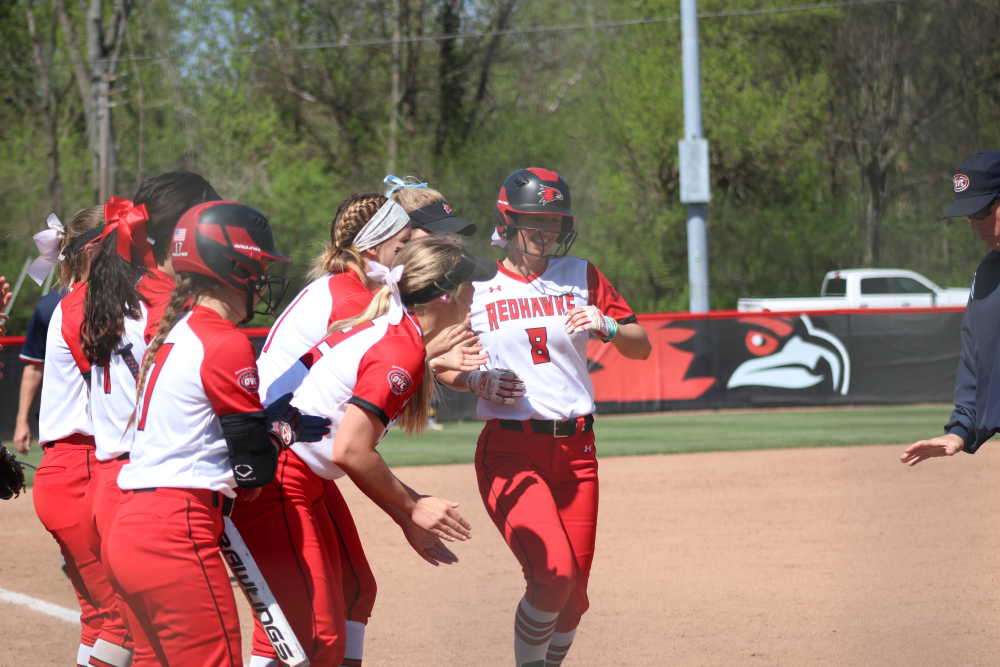 Senior second baseman Parker Bandy rounds the base paths after smacking her first of two home runs on the day against Murray State on April 15.
Photo by Kate Marshall ~ Photo Editor

The long ball was the order of the day when Southeast softball faced off against Ohio Valley Conference leader Murray State in a doubleheader Monday, April 15. The Redhawks finished with seven home runs in the two-game split.

The Redhawks (32-11 overall, 10-4 OVC) were outhit 9-5 in the first game by the Racers (21-20, 11-3 OVC), committed four errors and were unable to stop a late-inning scoring spree by the Racers that resulted in an 8-4 loss, but game two saw a different team at the plate in a 9-1 victory. Ten hits set SEMO up for a fifth-inning mercy rule walk-off single with the bases loaded, which edged the Redhawks into second place in the OVC behind Murray State.

In game one the Redhawks took a one-run lead in the bottom of the first inning when center fielder Rachel Anderson homered with a runner on in her first at-bat of the day. Two innings later the Racers answered with a home run of their own, by senior leftfielder Lillie Goetz, tying the game at 2-2.

Murray regained the lead in the top of the fifth when sophomore shortstop Sierra Gilmore sent home a run with a bases-loaded single.

Redhawk senior second basemen Parker Bandy knocked one out of the park with a runner on in the bottom of the fifth to again tie the game, but the Racers scored five unanswered runs in the last two innings to win 8-4.

Senior Haley Thogmartin, who was named OVC Pitcher of the Week for the third time this season, took her first loss of the season in conference play, though she only allowed two earned runs in seven innings.

The Redhawks broke their scoring silence right away in game two, scoring three runs in the first inning, including another first-inning home run, this time off the bat of pinch-hitting sophomore Kaylee Anderson.

A pair of Southeast home runs in the third inning, by left fielder Claudia Gallo and first baseman Ashley Ellis, gave the Redhawks a 6-0 lead before Bandy hit her second home run of the day in the fourth.

Murray State first basemen Lexi Jones returned the favor with a two-run homer in the top of the fifth but it proved too little too late when freshman pitch-hitter Chelsy Pena singled to the right-field gap with the bases loaded, scoring two runs and ending the game on a fifth-inning mercy rule.

Southeast head coach Mark Redburn said the team may have been relying too much on Thogmartin’s pitching in game one, but bounced back at the plate in the second game.

“Haley [Thogmartin] has been pitching so good for us and we can’t always just rely on her,” Southeast coach Mark Redburn said. “I appreciate how they bounced back in game two. It felt like we were more aggressive at the plate and swinging better; we just didn’t do that in game one.”

The power displayed against MSU was nothing new for this year’s team. Two Redhawks, Ellis and Gallo, homered April 12 in game two of a doubleheader against Austin Peay, helping to propel them to a 9-0 shutout win after losing game one 5-2.

Redburn said this team is one of the best power hitting lineups he has ever been around. He said it’s important that they also capitalize on their “short game,” consistently getting on base and keeping the defense on its heels.

“That first game was a prime example where we didn’t get bunts down, didn’t get on base, had to rely [on power] at the plate,” Redburn said. “We got to have some balance.”

Junior infielder Ashley Ellis, who went 3-for-3 with 3 RBIs in game two against MSU after an 0-for-3 game one, said some batting practice between games helped her to see the ball better in the second game. She said the team is able to feed off one another’s energy and she is excited for the prospects of the postseason.

“I think we’re going to finish on top this year, I can feel it,” Ellis said.

“This is a hard-working team,” he said. “They’re gutsy and they want it bad — they never take a day off, and as a coach, you want it as bad as they do, for them. We’re excited about the stretch [of games ahead] and where it’s going to lead to and then get into the tournament.”

The Redhawks will face two non-conference opponents April 16 and 17 at home before a four-game OVC stretch going into the weekend.