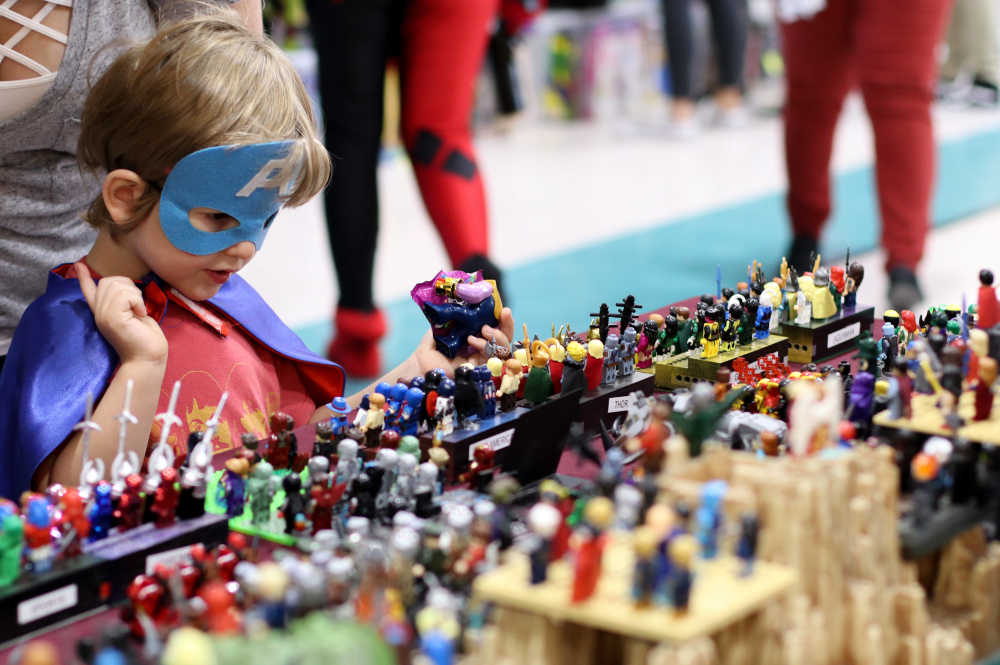 Fans of everything from anime to superheroes to steampunk were in their element April 26 to 28 at the Osage Center.

The opportunity to attend Cape Comic Con gave visitors the chance to not only check out the 140 vendors at the location, but they were also able to meet with special guests.

Paul Frank of St. Louis is a fused glass crafter and a steampunk fan. He was dressed in a top-hat and a Victorian vest with hot-air balloon prints for the occasion.

He said a few weeks ago he was in Kansas City selling his pendants, ring dishes, coasters and other items, and he has sold items in Jefferson City before as well.

It takes a little over 24 hours to make one of his items, he said.

“Certain venues will buy certain things,” he said, adding his assortment of items depended on where he was selling.

“I was looking for something to do when I retired,” he said. “And I started making. I made so much around the house, my wife said, ‘You gotta get out and sell some of this.’”

The convention, or “con” as many goers call it, had authors on the scene promoting their work and gaining visibility.

It was urban fantasy writer Christopher Webb’s first time at the convention, and he said it was a learning experience for him.

His book series, “The Consequences of Calamity,” has been in the works since 2014 and was on display, but during the convention, he said, he was going to release the name of the fourth book in the series.

It can be difficult to market his work, Webb said, “being a one-man show,” as the writer, editor and publisher while also working full-time.

“I get a lot of passive interest and my engagement is growing slowly,” he said.

The Crisp Museum at the River Campus was represented at the convention, with a table featuring chain mail, prehistoric tool recreations, origami and magic wands.

“We’re wanting to get people to the museum,” museum manager Jim Phillips said. “It helps that we’re going out to the community and bringing the museum of history to [them], as well as bringing them back to the museum.”

Pathfinder is a role-playing game based off the 3.5 edition rule set for Dungeons & Dragons, VonHasseln said.

That rule set was being replaced by a fourth edition, so the rule set was used by Paizo Publishing to create Pathfinder, he said.

He said the organization has a lot of participation, and that day’s game was the roughly 2,690,000th event.

There were also charities at the event trying to gain visibility while taking advantage of the comic book themes.

One organization that fit right in was Heroes for Kids.

“What we do is we use costumed characters to introduce kids to our real-life heroes: our law enforcement, firefighters, military,” said Jessica Johnson, one of the organization’s founders.

The group sold fan-related items that were donated to support BackStoppers, she said, an organization that supports the families of those killed in the line of duty.

The Heroes for Kids organization visits schools, churches, hospitals and other places where local heroes will wear costumes to meet the kids, she said.

Cosplayer Jeff Hubbard came to the event dressed as the Norse god and Marvel character Odin in a costume he designed himself.

“I don’t have a whole lot of choices for my age and body style,” Hubbard said. “I guess I can’t do Spiderman or Captain America.”

He said it was his second time at the event, and he enjoyed attending, mostly because he enjoyed meeting and listening to the people at the convention.

“I’ve always wanted to do this,” he said.