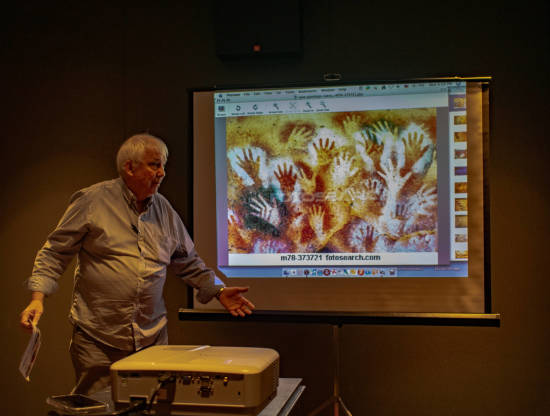 Southeast’s River Campus hosted Dave Carter, who directed a discussion for artists and those who appreciate art at the Rosemary Berkel and Harry L. Crisp II Museum on Tuesday, Aug. 20.
Photo by Jelani Days

Can art be inappropriate? Local artist and art enthusiast Dave Carter says maybe it can.

“We're taught that art has to be totally free, not restricted,” Carter said. “If you try to restrict an artist, you're violating the very principle of art.”

Southeast’s River Campus hosted Carter, who directed a discussion for artists and those who appreciate art at the Rosemary Berkel and Harry L. Crisp II Museum on Tuesday, Aug. 20.

Carter takes part in several art-focused community groups such as the Sainte Genevieve Artist Guild and Art St. Louis. Carter is co-chair of the Visual Arts Cooperative Cape Girardeau, a member of the Board of Directors of the Arts Council of Southeast Missouri, and a juried member of Best of Missouri Hands.

Carter was recruited by Ellen Hahs, who serves as the Education Coordinator for the River Campus.

“This is a good way to see Dave’s art, hear him talk about art, and have him teach you what to do with that art,” Hahs said.

Carter opened the two-hour discussion with a pop quiz, which required the audience to visualise drawing a tree. Throughout the presentation, he spoke about producing his work, telling personal tales about some of the pieces exhibited in the gallery.

“The second painting that I ever produced is here in the gallery tonight,” Carter said.

Carter showed several pieces from artists like Picasso, Mattise, and Van Gogh and asked the audience to debate which foundational philosophy they found to be most present. As the images came up on the screen, he invited the guests to speak up and express their opinions with evidence from the reference sheet he provided at the beginning of the presentation.

When it comes to being appropriate, Carter went on to explain that characteristics like size, subject, and framing could make a piece inappropriate, depending on context. For instance, if a gallery asks that artowrk not be framed and the artist submits a framed piece, it’s inappropriate.

After the two hour discussion, attendees were encouraged to speak to Dave Carter about their experiences with art. Southeast sophomore Clayton Moser explained that Carter’s discussion provided influential information on how to process creating and viewing art.

“Dave’s talk inspired me to be always improving, never settling for the bare basics,” Moser said.

Carter’s discussion took place as a part of the “Talks on Tuesday” series, which will occur on select Tuesdays in the Crisp Museum. This series will consist of informational presentations and discussion sessions. For more information, visit semo.edu/museum/museumcalendar or email museum@semo.edu or call (573) 651-2260.