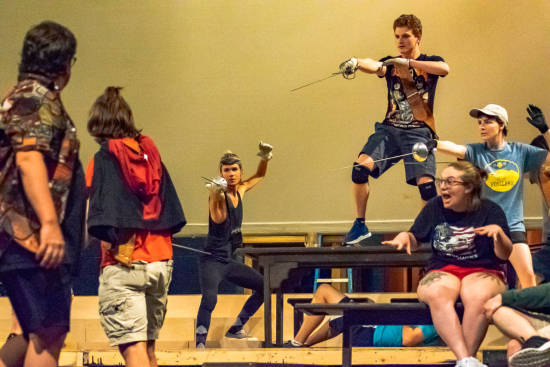 Cast members of Southeast's production of "The Three Musketeers" rehearse one of the many stage fighting scenes during a Sept. 5 dress rehearsal.
Photo by Jelani Days

Southeast students of the Dobbins Conservatory program have been extensively preparing to present the theatre production, “The Three Musketeers” running Sept. 25 through 29 at Bedell Performance Hall on the River Campus.

This two-hour, family-friendly romantic comedy was written by American Playwright Ken Ludwig. A mix of musical and a play formats, this production was inspired by the early 1620s but geared more toward the 1840s after the French romantic tale.

This production will include similar events of the first two “Three Musketeers” books but will take a more modern approach, eliminating the servants and having more representation of women’s roles. There is a mix of musical numbers, dancing, stage combat and comedy.

Bart Williams, director and associate professor of theatre said viewers can look forward to a lot of action and adventure.Although this production is set from a time period so long ago, it will still entertain everyone.

“There's something for the kids to enjoy with all the action like a Marvel movie, but then there are dialogue and one-liners that the parents will get,” Williams said. “There are 42 instances of choreographed violence in this play and we’ve got a huge ball that happens in Act 2 which is probably more like Madonna in 1990.”

Official rehearsals began Aug.11 with the main characters going through a combat intensive training two weeks prior. The cast consists of 36 people, not including the crew. Most cast members have at least two costumes.

Although the large cast number may be intense for directors, each participant is essential to bringing the production together cohesively.

“We don’t normally have a group of students both diverse enough and able to handle all the stage fighting in this,” Williams said.

Junior acting major Corie Williams —one of the three musketeers—will portray the religious but flirtatious Aramis.

As his first lead role at Southeast, Corie says he puts in an average hour and a half each day reading, going over his lines and researching his character so he can put on the best performance possible.

“I find a lot of characteristics that I share in my real life with this character,” Corie said. “Not to say that I’m a religious person who always lets girls get in the way, but I like girls and God so it just goes together.”

Corie said he’s looking forward to the production coming together and fitting like “a giant puzzle piece.”

Senior acting major Aalayah Norwood says she will play the “bossy Queen of France who can do whatever she wants.

Norwood said learning about the French and Austrian court has helped her get in tune with a character that much different than her own, everyday life.

For tickets, more information on The Three Musketeers or other River Campus events, visit rivercampus.org or call 573-651-2265.