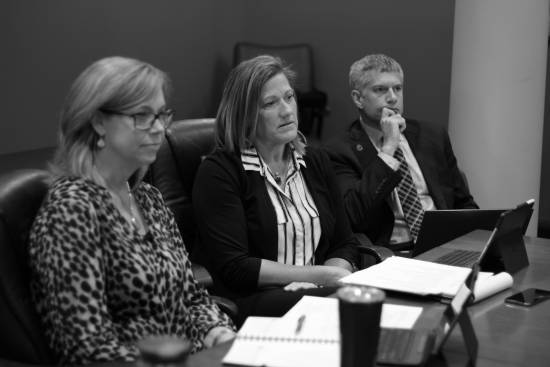 *Editor's Note: Names have been changed within the story to protect the identity of the source due to the source’s fear of retaliation related to their intent to apply for graduate school.

Decreased enrollment, instructors leaving and budget cuts have meant some classes students need to graduate are not always being offered.

Southeast senior Kara Boyd is pursuing a degree within the STEM college and was on schedule to graduate in the spring. Boyd was notified at a recent advising appointment to plan her final semester of classes she would have to remain an extra semester in order to because a required course was not being offered.

“It was really frustrating because I was in the mindset of graduating the following semester,” she said.

Provost Mike Godard said he and the deans make strategic decisions for course scheduling to ensure the staff is not putting any students behind on graduating.

“I go through and approve a litany of courses that we would consider to be under-enrolled,” he said. “I approve those courses to be offered purely based upon the fact that we need to make sure that our students are on track to graduate.”

Boyd said she followed her adviser’s recommendations throughout her academic career and was assured she should graduate as planned.

Godard said if enrollment is not robust, Southeast may not offer certain courses every term — in such a case, the university might offer the courses once a year instead.

“I walked into my advising appointment last fall expecting to discuss my last semester here at Southeast,” Boyd said. “Previously, my adviser reassured me that I was going to graduate on time.”

Boyd said the adviser gave her the list of classes to sign up for in the spring and told her to follow up with him for the following semester, fall 2019.

“That was the first time anyone told me anything regarding this,” Boyd said. “I was applying for graduate school at the time; now I have to wait an entire year to go.”

Vice President for Enrollment Management and Student Success Deborah Below said these nuances of classes not being offered every term can be managed with improved data.

“These instances are things that we spend a lot of time internally thinking about and trying to improve so that those who have to make decisions like a chairperson or dean have better information,” she said.

Boyd said after finding out she would be a semester behind, no help was offered from her adviser.

“This is probably one of the biggest areas that Southeast needs to work on,” she said. “I have had several friends where the same thing — [classes not being offered or missing instructors] — has happened to them.”

Below said the registrar's office recently rolled out a new advising reporting system intended to anticipate course demand better for chairs and deans.

Although her adviser was the one to pass along the news, Boyd said she does not believe it should fall back on him.

“Realistically, if the classes were offered and we had more instructors, the delay would have never happened,” she said.

The student said she had been taking a minimum of 12 credit hours each semester to make sure she would have enough to remain a full-time student the following semesters.

“I would have taken more if they were offered,” she said. “I am someone who has always been able to take a lot of credit hours, and I’ve always been a full-time student, but I had no choice this past year.”

“If there is a class keeping a student from graduating, our department has to rely on faculty,” he said, “I try offering independent studies or focused internships (students doing internships focused on one particular skill) to the seniors who need one more class to graduate.”

He said both of these options rely heavily on the faculty because they do not get paid much for teaching an independent study.

“It is not worth the time for what we are getting paid for it,” he said.

Deken said this issue could be correlated with the budget.

“Having difficulties in budget doesn't help anything,” he said. “The biggest issue is when faculty leave unexpectedly, anytime there are budget issues it makes faculty think twice about sticking around, often leading to professors leaving.”

He said the budget could also affect replacing faculty when one leaves or retires.

“When we have faculty leave, we are left with figuring out a new dynamic,” he said. “If the transition period takes too long of finding a new professor, the class may not be offered that semester.”

Deken said the budget also ties in with enrollment. Typically the university cannot offer a class with only 2 or 3 students.

“When we get that list of classes that only had a couple students enrolled, we justify them the best we can to the deans or provost,” he said. “Ultimately, they have to decide which ones we can afford.”

Not only did the lack of classes offered delay her graduation, but Boyd said it has affected her financially.

She said the scholarships that covered her full tuition for up to four years brought her to Southeast, but when the extra semester was added, the scholarship was no longer applied.

Because her graduation was delayed, Southeast’s Academic Support Center stepped in.

The Academic Support Center offered a scholarship that covered a portion of the costs.

“Although I received a different scholarship, I did not budget for this,” she said. “It only covers a portion of it, therefore, I still have the rest to pay.”

Boyd said if she did not have the extra scholarship, she would not have been able to finish her college career.

“I considered transferring schools and changing majors to graduate on time but I didn’t want to settle for something else that I didn’t actually want,” she said.