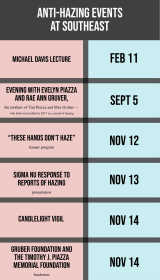 Members of several fraternities and sororities on campus hosted a series of events for Anti-Hazing Week to raise awareness and spark conversations about the topic of hazing at Southeast.

Southeast has strict guidelines for what qualifies as hazing.

“There are extreme examples of hazing such as forced drinking by new members,” said Bruce Skinner, associate vice president for Student Life.

Some tactics may not be as easy to recognize, Skinner said, but Southeast still considers them hazing. Skinner emphasized that there are examples of hazing that people may not perceive as hazing such as requiring members to go on a scavenger hunt.

Other methods Southeast considers hazing include forcing members to stay awake for days, eat certain foods or do an active member’s laundry.

He said Southeast follows the same guidelines as the Interfraternity Council (IFC), the national organization that manages fraternities.

Skinner said consequences for a chapter found hazing varies depending on the severity of the crime.

In addition to campus policies, Skinner said every individual organization has national hazing policies and standards that prohibit hazing.

Skinner said they encourage Greeks to go to a variety of programs. He said students have shown interest in the programs since the beginning.

“The Greeks, themselves said, ‘We need to be a part of this,’ and so they were a part of various programs,” Skinner said.

A series of smaller events have been put together to bring attention to hazing during Anti-Hazing week.

Some of the events that took place to raise awareness about hazing were an evening with Evelyn Piazza and Rae Ann Gruver, the mothers of Tim Piazza and Max Gruber — who both were killed in 2017 as a result of hazing — who came to Southeast on Sept. 5 to speak to members of Greek Life as part of a national effort to increase awareness about the dangers of hazing.

The event included students from all chapters at Southeast, with approximately 1,000 students in attendance.

Other events included a fundraiser sponsored by Sigma Phi Epsilon in support of the Gruber Foundation and the Timothy J. Piazza Memorial Foundation.

Sigma Nu hosted a program for its chapter Nov. 13 to train their members on the correct response to reports of hazing. The program was presented by a member of the Sigma Nu national headquarters.

The SEMO Panhellenic council hosted a series of programs for Anti-Hazing Week.

Some of the events include a “These Hands Don’t Haze” banner program Nov. 12 and a candle-light vigil Nov. 14 on the steps of Kent Library.

The candle-light vigil was organized to recognize those impacted by hazing. The Texas Roadhouse fundraiser Nov. 14, was organized with funds going to the Gruber Foundation and the Timothy J. Piazza Memorial Foundation.

In 1994, Southeast student, Michael Davis, died of injuries to a hazing ritual while pledging a fraternity.

Each year the Department of Mass Media sponsors an annual lecture in honor of Michael Davis’ death 25 years ago at Southeast. The lecture is a remembrance of Davis and the dangers associated with hazing along with recognizing the contributions of African Americans in the media.

Students who need to report a hazing violation can visit the Office of Student Conduct or Office of Greek Life in-person or online, where it can be reported anonymously.