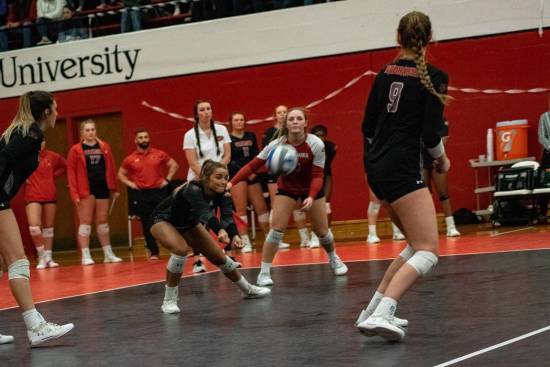 Senior defensive specialist Emily Boggetto digs for a ball against Murray State on Nov. 8 at Houck Field House. The volleyball team won the Ohio Valley Conference and advanced to the NCAA Tournament.
Photo by Jelani Days

Editor's note: Responses have been edited for length and clarity.

Southeast women’s soccer went 11-5-1 this season and picked up their first conference championship since 2011. Southeast coach Heather Nelson won her fifth OVC Coach of the Year award while freshman forward Hailey Block and senior Esmie Gonzales both received All-OVC honors. Block was voted the 2019 OVC Freshman of the Year and earned Second-Team and All-Newcomer selections for the OVC. Gonzales earned her third straight First-Team All OVC honor this season and ranks among Southeast’s top five career leaders in goals, points and minutes played.

Brady Barke, director of athletics at Southeast, broke down the Fall season of sports and dove into what he believes the key for success is.

Southeast Arrow: How do you feel about the recent success of the teams and what’s the plan moving forward?

Brady Barke: It’s been fun, I’m happy for all three of those programs. [They] did something that’s only been done one other time in the history of the OVC.

We’ve got really good people and I think that’s where it starts, with people. One thing that I think helps is that our coaches are growing closer and feeding off of one another in terms of that success … we always say success breeds success and I think there's some truth in that. People are bouncing ideas off of each other, working on developing their culture and changing the expectations and we’re finally starting to see some of that come fruition.

SA: Did the athletic department do anything different in terms of recruiting/scouting for athletes for this season?

BB: Recruiting hasn’t really changed a lot, our coaches have been pretty intentional about the student athletes they want in their program. It’s more about development and creating a winning mindset. We’re never going to be the “best resourced” athletics department, so we find ways to make the best out of what we have here and our coaches have taken the same approach, to an extent, creating a chip on their players shoulders.

Look at football for example. Three or four years ago we played a lot of close games and we just couldn’t seem to find a way to finish games; fast forward to this year and the team came from behind a lot of games because they have a new mindset. That's how programs are built, not just by having winning seasons but also a winning mindset.

SA: Do you feel constant pressure to uphold the winning culture at Southeast now due to recent success?

BB: I think so, but I think that pressure is natural for people to feel. We’ve had recent success lately, but I don’t think anyone has reached their limit yet in terms of success.

All of our programs are still hungry for more and now you have other programs who’re trying to get to the same level of success as everyone else. We’ll never be satisfied, we’ll always take some time to reflect upon and appreciate our journey and accomplishments, but we can never be complacent or satisfied. We set the vision to be the premier athletics department in the OVC, meaning we want other schools to look at us and say, “We want to be like them.”

SA: What’s the next step for the athletics department?

BB: I would be really surprised if I didn’t see us winning [an] additional championship this year, all of our programs are trending upward. I’m confident that over the next few years we will see Southeast athletics having unprecedented success at the Division I level.