“Shrek: The Musical” coming to a swamp near you 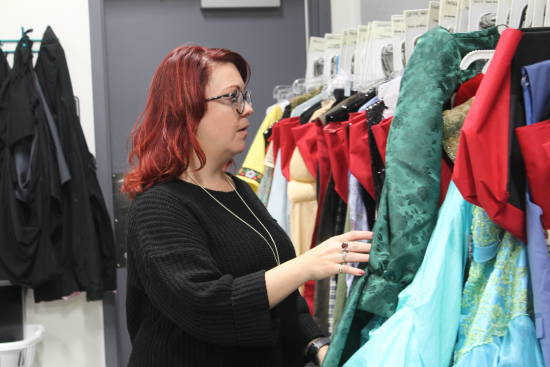 Assistant Professor of Theatre - Costume Designer Amber Cook going through the costumes for "Shrek: the Musical" in the costume shop on River Campus, Jan. 24, 2020.
Photo by Madison Stuerman

Southeast will present a cast of magical fairytale creatures for “Shrek: The Musical” on Bedell Performance Hall’s stage Feb. 19 through 23.

The music for “Shrek: The Musical”, by Jeanine Tesori, received a Tony award in 2009. The book and lyrics are by David Lindsay-Abaire.

Faculty and students collaborate on productions, which allows Southeast students the opportunity to gain experiences leading their peers through music, acting and dance.

“Shrek: The Musical” features six students who assist the faculty director, music director and choreographer throughout the rehearsal and show process. Rehearsals for the show will employ more than 100 hours of the cast and directorial staff’s time.

Kitt Lavoie is a celebrated playwright, director and filmmaker. This is his first time directing a mainstage production for Southeast. Lavoie will be assisted by Bachelor of Fine Arts (BFA) Musical Theatre (MT) junior Michelle Cuizon and senior Cynthia Thomas.

Contrino said collaborations between all personnel are essential for smooth production.

So what can audience members can expect from the musical?

“It’s the same Dreamworks movie but with a little bit of realism,” Kellum said. “It’s hard to explain, but the characters aren’t fairytale creatures, they’re people.”

Creating real characters out of fictional personalities can be tough. Carrion spoke about the challenges of evolving a cast of popular, strong personalities into a real cast.

“Finding the realism for these parts that we love is hard because we’re all used to seeing them done one way,” Carrion said. “Not falling into those habits is challenging, but we’re all working very hard to produce that realism.”

Southeast’s River Campus delivers a multitude of productions each semester, few of which are selected to be set on the Bedell Performance Hall stage. “Shrek: The Musical” will be the first mainstage production this year.

To purchase tickets for “Shrek: The Musical” and see future productions, visit https://rivercampus.org/upcoming-events/.