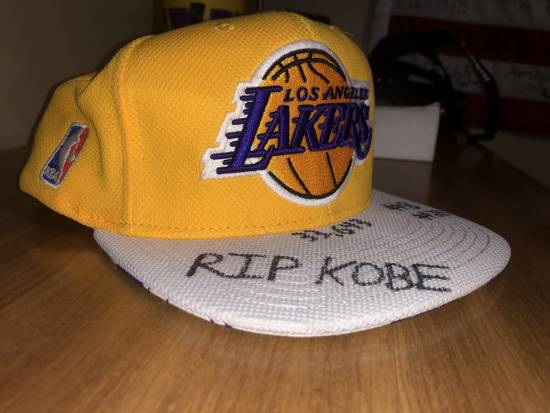 A Los Angeles Lakers hat with “RIP KOBE” written in large print on the top of the bill. Both “#8” and “#24” are written on the right side of the hat for the two numbers Kobe Bryant wore during his 20 year career. The number “33,463” is written at the center of the hat for the number of points Bryant scored in his career, fourth-most in the history of the National Basketball Association.
Photo by Zach Tate

The waves reverberating throughout Cape Girardeau were felt like an aftershock following news that Kobe Bryant, alongside his daughter Gianna, and seven other lives were lost in a helicopter accident in California on Sunday morning.

“Once it happened my heart kind of sank ... It's not something you can really comprehend,” Southeast senior Nate Owens said.

“I saw [it] trending on Twitter and I was like, ‘Okay, this is fake’. This can’t be real … there is no way this happened,” said Kade Fleming, a junior cybersecurity major.

Senior corporate communications major Trevor Sumpter, who was sitting in a meeting when he found out, said he couldn’t think about anything else when the seemingly unreal news broke.

“I don't even know what to think about this’, and I was just so hurt, for his family and [the] others involved.”

Tyler McLemore, a former Southeast football wide receiver and alumnus, spoke to the incident in disbelief, relating to Bryant as a father.

“Once I heard that his daughter was with them - I have a daughter of my own - I couldn't imagine being in a helicopter that’s going down, holding on to my daughter like that, knowing that it was over … I just felt for the man.”

Many people were shocked when finding out the news from the original TMZ report Sunday morning, and per the Los Angeles County Sheriff's Department, unfortunately so was the Bryant family.

“It would be extremely disrespectful to understand that your loved one perished and you learn about it from TMZ … That is just wholly inappropriate,” LA County Sheriff Alex Villanueva said in a press conference.

For a tragedy that was difficult for most to process, for a generation who grew up with Bryant, Fleming said the rest of his day, suddenly was all about Kobe.

“I wore my Kobe jersey all day … I went and played basketball … I hopped on NBA 2K and I bought a Kobe jersey.”

Vice President for Student Life Bruce Skinner said he always had a tremendous appreciation for the 18-time All Star.

“He's the only player that my wife and I specifically made an effort to go see play,” Skinner said.

Adding he might have been more of a fan of Bryant’s will-to-win more than anything else.

“I respect that, and it doesn't matter what area of life, where you get around people that just say ‘I refuse to lose,’ it doesn't matter the time nor the effort I put in … It's hard not to have a great deal of respect for that kind of mentality.”

By the end of his 20-year career in the sport, Bryant broke countless records and created lasting memories for legions of sports fans.

For McLemore, the Kobe moment he remembered most was when Bryant scored 81 points in a single game against the Toronto Raptors on Jan. 22, 2006.

“Aw man, favorite Kobe memory? It has to be when he scored those 81 points … I remember watching that.”

Both McLemore and Fleming remembered watching Bryant’s last game on April 13, 2016, when the 39-year-old famously ended his career scoring 60 points in a winning effort against the Utah Jazz.

“There’s no better way to end your career then a 60-point game.” Fleming said. “His final goodbye game, you know, that was crazy,” McLemore remembered.

For most, Bryant was more than one memory, one game, or one shot.

“He was an icon, he has created a huge legacy,” Owens said. “I looked up to him obviously.”

“[What] I’ve always respected was his athleticism and his professionalism he brought to the game, but then everything he did outside the game. [He] spoke multiple languages,” Skinner said. “He was far more than just a basketball player, and I always respected that about him.”

“You even think about just shooting a paper ball into the trashcan and yelling ‘Kobe,’” Fleming said of Bryant’s impact. “We speak of him so often and we don’t even realize it.”

“I will forever remember Kobe Bryant not only for the way he approached life or the game of basketball, but [also] the way he was as a father,’’ McLemore said.

McLemore, a fellow Eagles fan like the Philadelphia-native Bryant, said there was just one thing he had to do on Sunday to remember Kobe.

“To be honest, I just had to do one last [thing], take a piece of paper, ball it up and yell ‘Kobe,’ because you know growing up - that’s just what you did.”

Bryant, who passed away at the age of 41, left Philadelphia when he was 18, and forewent college for the National Basketball Association.