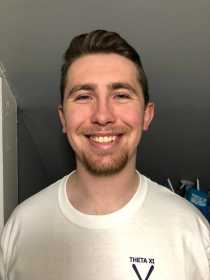 When I heard the news, I didn’t believe it. I couldn’t. I refused. There was just no way that Kobe Bryant was dead.

The man everyone thought would live forever. Gone.

I never really imagined a celebrity death would affect me like this. Then I realized how much Kobe really impacted my life.

Basketball is my favorite sport by far, and the reason is because of Kobe. I started getting into the sport in the mid-2000s and needed a team to root for. Kobe Bryant was the most exciting player that just seemed to do everything the hard way because it made him a better player.

And that resonated with me throughout my life.

He inspired me to go and work harder than everyone else on the court, field or classroom. Why should I stop working if I’m not at the top? If I wasn’t in the starting lineup, I would work my tail off on scout team to give the starters the best damn look they had at a real opponent. Because what else would I do?

He refused to not be the hardest working person on the court, and that was everything I wanted to see in a player. He was a five time champion, scored 40 points on every team in the league, worked both sides of the ball, mesmerized an entire generation and is the greatest Los Angeles Laker of all time.

And he’s gone, just four years after he retired. And that’s what has got me so messed up.

I will be the first to tell you he was going to do even greater things off the court. Toward the end of his career, he really started focusing on what he was going to do after basketball, and that’s when the world really learned about his love for storytelling.

Kobe loved to tell stories. He LOVED it. And one of his projects after retirement was to start writing children’s books, something I eventually want to do in my life. Kobe starting “The Wizenard Series;” a Harry Potter-like book series based around traditional sports. For someone who read the Harry Potter series seven times and is a lifetime Laker fan, I was ecstatic for this.

Kobe was one of the biggest advocates for the Women’s National Basketball Association and was close to many women in the league as well as stars in the National Collegiate Athletic Association Division I.

Those women are at the top of their game, and do not get the recognition that is deserved. Most laugh off the WNBA as a joke. They are professional athletes. Professional athletes who have to often play for a league overseas during the offseason make more money because they aren’t being compensated like they should (although the new collective bargaining agreement is going to help that).

Some of those stars could hang in the NBA today. Kobe Bryant said so, and I agree.

And Kobe wanted nothing more than for his 13-year-old daughter Gianna to continue on his legacy. She was going to go to the University of Connecticut and play for the most decorated women’s basketball program in the NCAA and go on to do great, great things in the WNBA. You could see it in his eyes, how badly he wanted her to go on and be great.

And she, too, was taken from this world in that fateful helicopter crash, along with seven others. Longtime Orange Coast College baseball coach John Altobelli and his wife Keri and daughter Alyssa were also victims in the crash. Mamba Sports Academy assistant coach Christina Mauser, mother Sarah and and daughter Payton Chester and helicopter pilot Ara Zobayan all lost their lives that die on the way to a travel basketball game.

Those kids never got to live their lives fully, and that breaks my heart. Those parents died supporting their kids — they were all being a parent.

That was one of Kobe’s favorite things about retirement — being with his kids. He loved being a dad. He told Elle Duncan when she was eight months pregnant, “I love girls. I’m a girl dad.”

And he died doing what he loved most; being a dad. A girl dad.