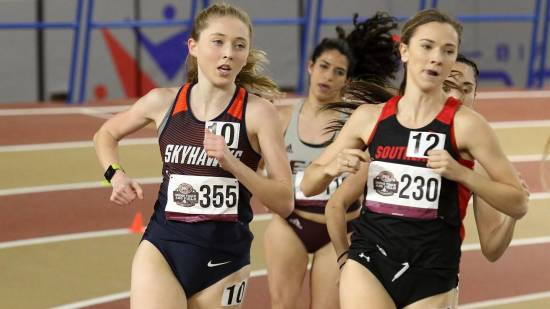 Southeast track and field is back this season after making a deep run in the Ohio Valley Conference Outdoor Championship last season, with both the men’s and women’s teams finishing in second place.

In the championship, the Redhawks women totaled 123.5 points but fell short to Murray State University, that won with 137 points. Although Southeast's men fell to Eastern Illinois 175.5 to 172, senior thrower Logan Blomquist accumulated a championship-best 33 points for SEMO over the three-day meet and earned the title of the OVC Men's Athlete of the Championship. Blomquist went on to finish 24th overall in the hammer competition at the 2019 NCAA Division I Outdoor Track & Field Championships.

Southeast coach Eric Crumpecker gave a synopsis of what the team will look like this season.

“We feel good moving forward that we’ll have a good shot at winning a conference championship with them,” Crumpecker said. “The men were a few points short of winning the outdoor championship last year; some of those guys are back, and we have a bunch of new faces on the team, so I think we’ll have a shot at that.”

Crumpecker elaborated on a few of his returning talents to be on the lookout for this season, athletes with “record-breaking potential” who are sure to improve throughout the year.

“Kaitlyn Shea is running well in the distance and is a threat to break our 3k meter school record, and Carli Knott might take out our mile record within the next week or two. On the men’s side of things, Colin Schwab is running really well along with Anterreon Mcclain, who’s leading the conference in the 60, so I’m looking forward to see what they do,” Crumpecker said.

The 2019-2020 indoor season kicked off on Dec. 6, and the team has had three meets since then. Southeast won the dual meet against Southern Illinois University-Edwardsville 178-71 and secured multiple individual victories in the meets at Purdue and the University of Missouri.

“We go in every year expecting to be successful. Our goal every season is to try to win the conference championship, ” Crumpecker said when asked if he thinks other schools should be surprised by Southeast's recent success.

“What we’re doing now doesn’t surprise me, and I think we're only going to get better as we get into the meat of our season. I’m excited about what we have to come,” Crumpecker said.

The Redhawks’ next meet will be at the Indiana Relays in Bloomington, Indiana on Friday Jan. 31.