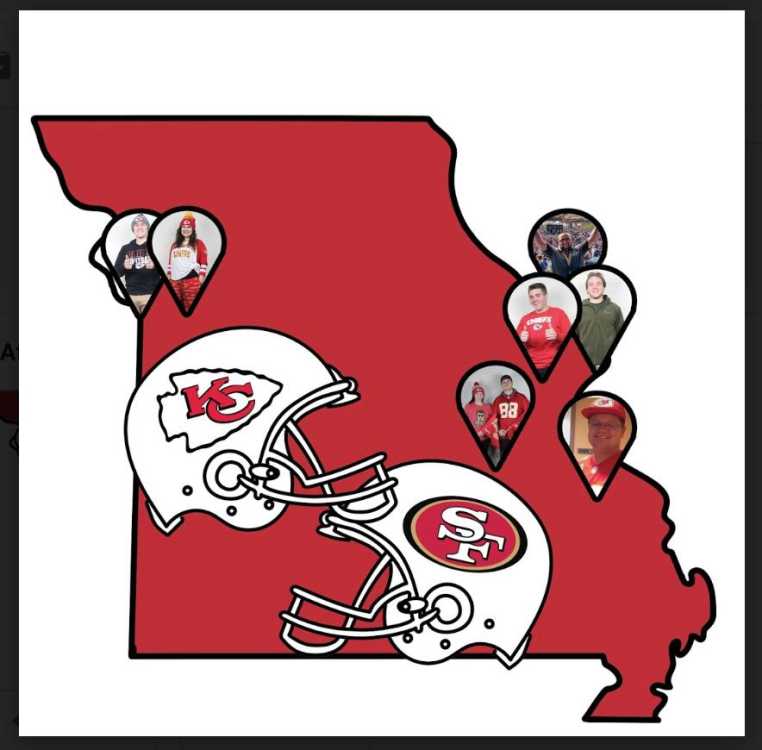 Arguably the biggest event in America will take place Sunday at 5:30 p.m. in Miami. That event is Super Bowl LIV. The Kansas City Chiefs and San Francisco 49ers will face off for the right to bring the Vince Lombardi trophy back to their respective cities.

Despite Cape Girardeau being 1,100 miles from Miami, many fans with ties to Southeast believe they have a dog in this fight.

This weekend will not be an easy one for Michael Brummett, Jake Graves and Brennen Rowan, roommates whose friendship will be put to the test.

Graves is the lone 49ers fan in the trio, while Brummett and Rowan are die-hard Chiefs fans.

“It was always really cool that he went to Eastern Illinois,” Graves said. “Once the Patriots traded him to the ‘Niners, the first thing I did was order a Jimmy Garoppolo jersey.”

Graves said he thinks cooler heads will prevail and everyone will keep it respectful.

“You know it’s going to be an in the moment thing so it could go [either way],” Graves said. “We’re all competitive.”

Rowan said there is no chance it will be respectful if the Chiefs win.

Rowan said he doesn’t think Graves will dish anything out if the 49ers win.

“It’s two versus one, so I don’t think he’s gonna do anything to us,” Rowan said.

Brummett said he hasn’t seen much of Graves the last few weeks.

“We’ve been avoiding each other,” Brummett said.

Brummett and Rowan are both confident in the Chiefs’ ability to bring the Lombardi Trophy back to Kansas City.

“I will say that the Chiefs are gonna win,” Brummett said.

“The Chiefs are gonna win this game, and I’m gonna say it’s gonna be a close one with a 24-21 final score,” Rowan said.

Boyer grew up a 49ers fan since the Rams were still in Los Angeles at the time, but he said he is fine if either team wins Super Bowl LIV.

“I don’t know that it’s like I’m gonna be disappointed if the 49ers lost either,” Boyer said.

Boyer said some of his favorite 49er moments come courtesy of Joe Montana and Jerry Rice.

“The last Super Bowl for the 49ers, I think against the Broncos, and they just pummeled them,” Boyer said. “I think it was 55-7 maybe and Montana and Rice were just doing their thing.”

Boyer said he likes to enjoy the Super Bowl with his friends and family.

“It’s a cool day to hang out with all your friends and family, have a cold one, and some good food,” Boyer said. “Nothing too fancy.”

Boyer said he thinks the Chiefs will come out victorious on Sunday evening.

“Their offense looks like it could just beat anybody so I have to think Kansas City is gonna pull it out,” Boyer said.

Chloe Sherer is a freshman at Southeast and said she was born just five miles from Arrowhead Stadium where the Kansas City Chiefs play.

“My dad says I was born breathing ‘Chiefs air’ and it just naturally runs in my blood,” Sherer said.

Sherer said she hopes to get to watch the Super Bowl with her boyfriend and his twin brother.

“I’m hoping to get to go to their party, but it’s in Saint Louis, and I have a speech at 8 a.m. on Monday,” Sherer said. “I am going to celebrate it in some way, because how often do the Chiefs make the Super Bowl?”

Sherer said she believes the Super Bowl will play out a lot like the AFC Championship game in which the Chiefs defeated the Tennessee Titans 35-24.

“I bet it’s gonna be like the game the other day where they’re down a little bit, and then get a big confidence booster and beat it out of the water,” Sherer said.

Andrew Willis graduated from SEMO in December and said he became a Chiefs fan after the now Los Angeles Rams departed from St. Louis in 2015.

“I was like, ‘I kind of want to keep the loyalties in Missouri,” Willis said. “They were a historic franchise. They’ve had the same family as the owners for so long.”

Willis said he will forego a Super Bowl party this year.

“Sometimes I’ll go to a Super Bowl party, but I’m not going to this year,” Willis said. “I want to stay in my house just so I know I can pace as I please in my living room.”

Willis said he believes if the Chiefs come out “full speed” from kickoff, there’s a chance they run away with it.

“I’m not trying to disrespect the 49ers, they’re a really good team, but I think if we come out full speed ahead there’s a chance that we could possibly kind of run away with this one,” Willis said.

Devon Scott and Allie Hammack are both juniors at Southeast. Scott credits his fifth grade math teacher for his love of the Chiefs.

“He was a die-hard Chiefs fan,” Scott said. “Whenever you would walk into the room you would see Chiefs posters, flags, just everything covered in red.”

Hammack said her dad is the reason she’s a Chiefs fan.

Scott and Hammack were in attendance during the Chiefs 51-31 comeback win over the Houston Texans. The comeback began while Scott was at the concession stand getting drinks.

“I was like, ‘OK this spot I’m standing in must mean something,’” Scott said. “I stayed there the rest of the half, standing in that one spot.”

Hammack and Scott were both hesitant in making predictions for how the game will go Sunday.

“I try to avoid the subject,” Hammack said.