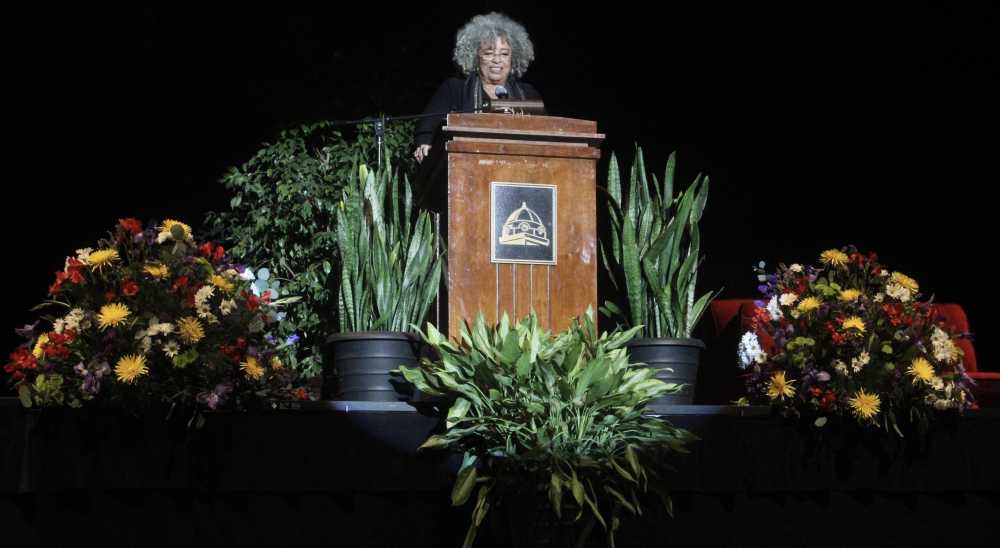 Despite some question as to whether Angela Davis was the right speaker for the Martin Luther King Celebration Dinner, more than 1,200 people showed up to hear the civil rights activist, author and professor speak Wednesday night.

Davis spoke on the interconnectivity of social issues seen throughout history and still today at the 15th annual celebration held at the Show Me Center Jan. 29 from 5 to 8 p.m. This year’s theme was “Women in Action: Pursuing the Dream.”

Davis shared personal experiences she referred to as “pivotal moments” with historical figures such as Martin Luther King Jr., Malcolm X and Rosa Parks and challenged audience members to “revise the way they think of history.”

When talking about King, she said people often “sanitize and trivialize his message and life” by only remembering the positive aspects of his life, and neglecting to remember how he was a “disturber of unjust peace who called for massive nonviolent demonstrations to end war and poverty in our national and world houses.”

Assistant to the President for Equity and Diversity and Dean of Students Sonia Rucker also acknowledged this sentiment in her opening remarks for the evening, stating the legacy of King is more complicated than the legends some have created about him.

Davis also reminded the audience how many people opposed King’s methods of protesting the Vietnam war, including people of color.

She reflected on the Civil Rights movement, which she said she prefers to call “the mid-20th century Black Freedom movement” because civil rights only constitutes one element on a broad spectrum of issues involving freedom being faced in the 1970s — some of which, she noted, are still relevant today.

“Freedom is a constant struggle and conquest,” Davis said.

She paid tribute to the unnamed women who played key roles behind the scenes of the Civil Rights movement, such as Coretta Scott King and Dorothy Height and domestic workers who were instrumental in the Montgomery Bus Boycott in 1955.

“The bus boycott, and the women who organized it, began to be persuaded not to ride the bus,” Davis said. “It was because of their collective imagination of a better future that they respected the boycott and refused to ride the bus and were responsible, ultimately, for the success of this movement.” 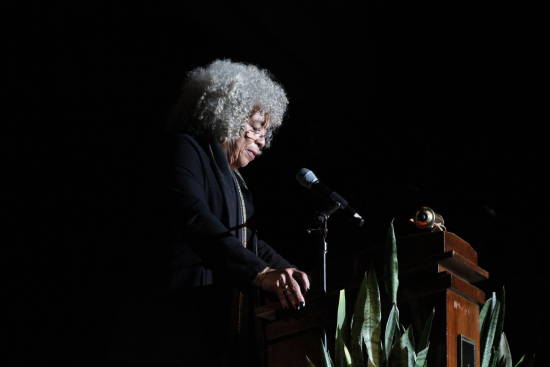 She added it was interesting that in 2020, there are still efforts to organize domestic work, and how those who do that kind of work are “undervalued.”

Davis spoke about faults in the government’s approach to mass incarceration, indicating the government has poured large amounts of money into the prison system by creating rehabilitation programs where the government plays little to no role, and where instead, much of the responsibility is placed on churches, families and communities.

Davis criticized the programs for being centered around rehabilitation reform and ignoring the larger issue of sentencing reform — noting a disproportionate number of people of color and a rising number of women who are currently incarcerated — and spoke on her support to abolish the prison-industrial complex.

She also showed her support of feminism, and said “feminist approaches compel us to think more deeply about prison reform” and “help us to recognize racism.”

She urged the audience to “think globally” about how social issues, such as racism, sexism, heteropatriarchy, global warming, gun violence, poverty, militarism and more, are interconnected at a local and national level.

“Local problems are all interconnected with the world,” Davis said, “and when you awaken the mind of an activist, they will not be satisfied with a focus on local problems.”

She added she is impressed with today’s youth as this activist mindset is being seen more frequently in younger people and said, “it is young people who give us hope,” and the “collective challenge of today” is to make sure hope is “continually regenerated and reinvigorated.”

Davis is a 76-year-old author, scholar and civil rights activist. She currently serves as a Distinguished Professor Emerita for interdisciplinary Ph.D. programs at the University of California, Santa Cruz.

Davis has published 10 books in her career and given lectures all over the world.

Her work has revolved around a range of social problems associated with incarceration and the generalized criminalization of communities who are most affected by poverty and racial discrimination.

She is also a founding member of Critical Resistance, a national organization dedicated to the dismantling of the prison-industrial complex and is affiliated with Sisters Inside, an abolitionist organization based in Australia.

In the early 1970s, Davis became the third woman to be placed on the FBI’s 10 Most Wanted list for her involvement in Jonathan Jackson’s attack on a courtroom in Marin County, California.

Due to her background, there was some controversy as to whether Davis was the right choice for a keynote speaker.

Rucker addressed the controversy during her opening remarks, saying, “Dr. Angela Davis has earned her place in history and has earned a place on this stage.”

Southeast senior Khalil Joiner who attended the celebration dinner also commented on the controversy and said people needed to be more open-minded to learning from Davis’ experiences and look at the “bigger picture” of why she did the things she did.

“Sometimes you gotta get comfortable with being uncomfortable,” Joiner said. “I think people sometimes just kind of get trapped in a bubble of old thoughts, and they purposely remain ignorant; they’re so deep into themselves that they don’t feel like it pertains to them.”

Despite the controversy, the celebration dinner was sold out a week before the event, bringing more than 1,200 people to the Show Me Center, according to Director of University Communications Ann Hayes.

This year’s student speakers were Xavier Payne and Alexis Buckner.

Other involvement from students included Brianna Justine who sang, “The Star-Spangled Banner,” and performances from student groups Black Light Choir and God’s Ensemble.

Special guest performer Quentin Oliver Lee recited a poem by Langston Hughes called “Song to the Dark Virgin,” set to music by Florence Price, and performed “Make Them Hear you,” from the musical “Ragtime.”

Southeast will host a variety of events for Black History Month; a full list of events can be found at semo.edu/mlk/events.