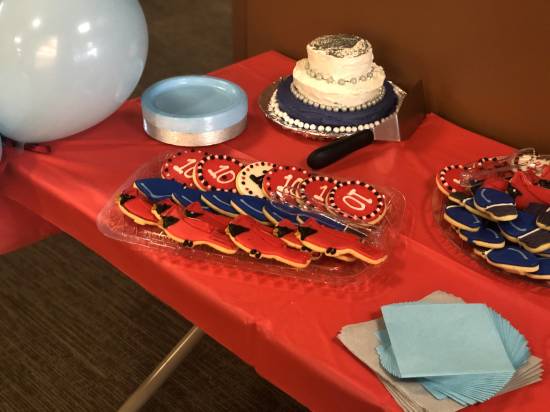 Cake, cookies and other refreshments were available for attendees.
Photo by Christi Hartung

Also in attendance were state senators and representatives, including former Sen. Jason Crowell, who was involved in the opening of the center in 2010.

Director of the Autism Center Renee Patrick invited a variety of speakers to the celebration, including those who have received services from the center over the years.

“That’s really what it’s about, so it’s really cool that they agreed [to speak],” Patrick said.

Dakota Smith, a Greenville high school senior with Autism Spectrum Disorder (ASD) received treatment at the center. He said without the center and the support of his mother and grandmother, he would not be the person he is today.

“[Patrick] has been like a friend to me, teaching me things that I can do to overcome my problems and rise above my disorder,” Smith said. “I’ve come so far — I have friends I talk to on the phone, I went to prom last year, I spend most of my time in the mainstream classroom and I’ve been in the top five of my class since my seventh grade year.”

Southeast alumna Kathleen Howland said her time spent working in the autism center opened her eyes to the challenges faced by those with ASD.

“It made me more aware of people who are different than me in Cape,” Howland said. “At school, you see everybody that’s in my age range and we’re all doing the same thing and going through the same thing together. Coming here made me realize that there are other people out there that really need help, and I’m very fortunate to have been in that position.”

Michelle Crosnoe of Cape Girardeau shared one of her most memorable experiences with the center.

Her 10-year-old son, Connor, is on the spectrum. She said she vividly remembers the day Patrick diagnosed her son with ASD. 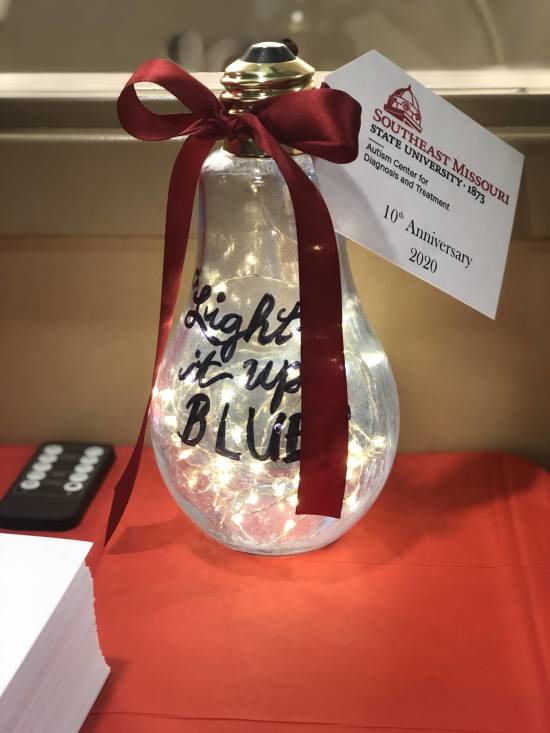 Faculty of the center created decorative lightbulbs that read "Light it up BLUE" to give to the speakers of the celebration.
Photo by Christi Hartung

“I remember [Patrick] looked me right in the face, and her eyes held mine, and she said, ‘His future’s gonna be good,’” Crosnoe said. “And you know what? She was right.”

Southeast President Dr. Carlos Vargas said while the center mostly focuses on children, its doors are open to people of any age looking for help managing their ASD.

The construction of the center was funded by the Lewis and Clark Discovery Initiative and then approved in 2007 by the Missouri General Assembly.

The facility offers a variety of treatment plans including speech therapy and counseling, among others. The Autism Center can be reached at (573) 986-4985 or at autismcenter@semo.edu.