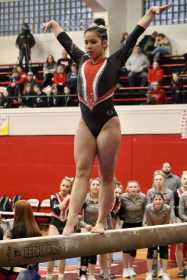 Southeast gymnastics grabbed grabbed a close 192.775-192.475 win over the Illinois State Redbirds on Friday at Houck Field House. The Redhawks outscored their previous season-high of 191.450.

This is the first win for the Redhawks at Houck Field House since March 9, 2018. The Redhawks are looking to build upon this win and carry the momentum going forward.

“They just had to put the missing together and they were able to do that,” Southeast coach Ashley Lawson said. “We still had some mistakes but the last two events they were really able to turn it on.”

Southeast freshman Lindsey Moffitt felt the energy of the team after the first victory of the season.

“It felt really great; it was just great doing it with my team, and just altogether the excitement was just so real,” Moffitt said.

“It was amazing, and my team was right behind me and everyone was cheering for me and the crowd was into it. I absolutely loved it; it was so much fun,” Moffitt said after her performance.

Prior to the floor routine, the Redhawks were trailing and it appeared there would be disappointment for Southeast in the home opener, but the strong showing on the floor ensured this would not be the case.

“We just built on one another, the first girl went out there and did her job and she set her personal record, and from there it’s a contagious energy. “ Lawson said. “They feed off of each other, we celebrate one another’s successes, and I think each routine was set up nicely for the next routine to score even higher,”

The Redhawks look to use this victory as a building block going forward.

“I think it is going to give them the fire inside to believe that they’re good. We tell them all of the time that they’re good, but I think that this is what they needed.” Lawson said “They needed to be able to get this win under their belt, and to get this score under their belt, for them to really take it and run with it and do what they know how to do,”

The Redhawks move to an overall record of 4-6 on the season. Their next meet will be Feb. 7 against the Lindenwood Lions at Houck Field House.