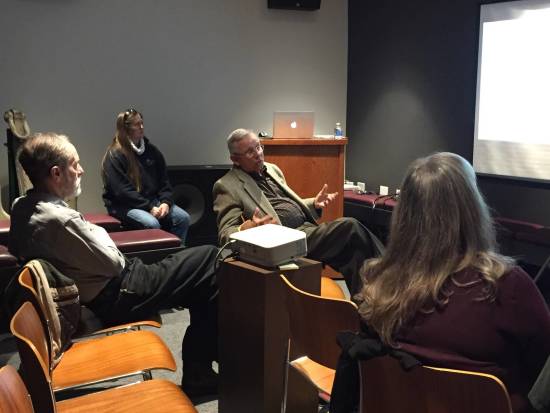 McMillan is the adjunct research associate in the Department of Anthropology at the University of Missouri-Columbia as well as the former director of the Illinois State Museum.

The lecture explored the White River Basin regions in Missouri and Arkansas, known for their unique ability to preserve otherwise generally perishable artifacts.

McMillan proceeded to show images of historical items such as baskets, woven fabrics, weapons, ceramics, clothing and food that these basins, also referred to as “dry shelters,” accommodated.

McMillan discussed what was called “Ozark Bluff Dweller culture” which was introduced by archeologist Mark Harrington. In 1924, Harrington planned to carefully explore the contaminants of these basins and overhangs resulting in a mass of discoveries.

McMillan explained Harrington’s findings were accumulated from a total of 25 shelters and later showcased in the Museum of the American Indian in New York.

Throughout the lecture, McMillan continued to describe the timeline of this new culture which expanded after Harrington's discoveries.

A decade after Harrington’s series of excavations, the University of Arkansas Museum excavated another eighty bluff shelters, enormously increasing their collection of artifacts which are still curated by the Arkansas Archaeological Survey today. The trend also expanded to Barry County, Missouri, where several other dry shelters were excavated.

McMillan experienced the culture first hand when he briefly took part in a bluff dweller group.

“I spent the summer of 1957 with an archaeological field crew from the University of Missouri working in dry shelters in the Table Rock Reservoir area prior to its final construction,” Mcmillan said. “The sediments were so dry that the crew was required to wear dust masks while working in the bluff overhangs.”

McMillan was influenced by his history with the cliffs and their local relevance to decide on the subject of his lecture.

“I chose the subject through a combination of my own experience with the bluff shelters as well as their unique preservation environments that offer the archaeologist insights into perishable items not found in the archaeological record at other places in the eastern U.S. and Midwest,” McMillan said.

McMillan said he hopes the audience left the lecture aware of some lost local history.

“The bluff shelters of southwestern Missouri and northwestern Arkansas are well known to archaeologists, but perhaps not to the general public, especially people living outside that immediate area,” Mcmillan said. “Hopefully, the talk will give people some insights into this unique region.”

Ellen Hahs, Crisp Museum curator of education, explained the goal in hosting these talks to highlight local history and its significance beyond the region.

“We choose a variety of speakers to give talks on topics that are not only covered in our museum exhibits, but those that could have national interest,” Hahs said.

“Talks such as this presented by Crisp and other museums, and similar groups provide an opportunity for community members to learn something new, and to meet others who may have similar interests, ” Neumeyer said. ”The talks could help even a student make decisions on what course of studies to pursue.”

Crisp Museum’s next “Historic Talk Tuesday” will be hosted by James Phillips on March 24 at 7 p.m.