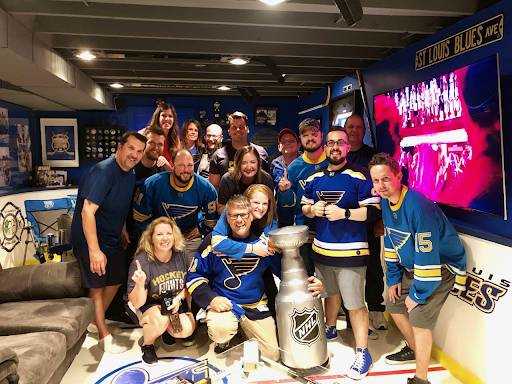 St. Louis Blues fans around the country rejoiced on June 12 as their team won its first Stanley Cup in the 52-year existence of the franchise. The win came in Game Seven of a grueling series against the Boston Bruins.

Fans forgot their differences and came together as one, celebrating all across the city, including in landmarks such as Busch Stadium and the Enterprise Center.

Dennis Minner had other plans however — he celebrated in the Minner Arena Fan Cave.

Minner – a 1996 Southeast graduate and owner of Minner Photography — began building his fan cave in 2016, in his O’Fallon basement. A fan cave as Minner describes it is “a politically correct term for a man cave.”

“My neighbor was a general contractor, so I shot his daughter's wedding for free and he helped me start building,” Minner said.

Construction on the Minner Arena is still underway with the next big add-on being “The Penalty Box.”

“It's a bathroom which we are naming ‘The Penalty Box,’” Minner said. “We’re going to have a urinal in there and we are going to put Blackhawk and Predator logos in the bottom of the urinal.”

Minner’s love for the Blues began during his time at Southeast. The first Blues game he ever attended was in 1995.

“I remember getting to see Tony Twist drop the gloves for the first time,” Minner said. “It’s gone full circle because now Twist has visited my basement multiple times. It’s been kind of surreal.”

“It was cool because whenever I have had those autographed and authenticated, [Twist] did it while he was at my house,” Minner said.

Since the building of the Minner Arena, many Blues alumni have visited it, and it has helped Minner land a spot on the weekly Blues NHL Podcast, hosted by former players Jamie Rivers and Darin Kimble.

“The Blues did a video interview with me and ran clips of it during the Winter Classic,” Minner said. “Shortly after that, I started doing a weekly spot with KMOX and Jamie Rivers began checking out the fan cave and eventually invited me to be a part of their show.”

Like many Blues fans, Minner’s favorite — and most painful — memories of the team came during the 2019 Stanley Cup Finals. Minner was able to attend every home Stanley Cup Final game and has been a season ticket holder since 2013.

“Being at Game Six (a 5-1 Blues loss) was one of the most painful memories because knowing they could have won it with us there was so tough,” Minner said. “At the same time, it gave us an incredible opportunity to watch Game Seven (a 4-1 Blues win) in our basement surrounded by friends and family.”

Despite being in attendance for all of the Stanley Cup games, Minner said his favorite Blues game of all time came during the 2017 Winter Classic where the Blues defeated the Blackhawks 4-1 in front of 46,000 people at Busch Stadium.

“Being in Busch Stadium, outdoors like hockey is supposed to be played in front of 46,000 screaming fans and watching the Blues beat the Blackhawks,” Minner said. “That was just a cool experience.”

For more information on Minner or his fan cave, visit the Twitter and Instagram accounts @MinnerArena or listen to his weekly segment on the Blues NHL Podcast.