Southeast alumna running to be featured as Jetset Magazine covergirl 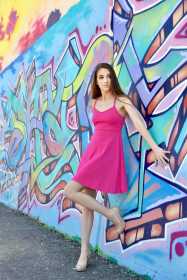 Southeast alumna Izabel Gray was granted the opportunity to run for the cover of Jetset Magazine, an American lifestyle publication based in Scottsdale, Arizona.

Jetset Magazine runs an annual competition to find the next Miss Jetset. Various women from around the world compete while raising money for the Andrew McDonough B+ Foundation, a children's cancer charity.

Out of all the things her modeling career allows her to do, being artistic is what she most enjoys and it has given her the opportunity to be in the running for Miss Jetset.

“I really like how artistic I can be with modeling,” Gray said. “I actually didn’t know about this until I got submitted for it and told I would be a good fit.”

In the midst of such an opportunity, Gray said she relies on support.

“I have a lot of support, and I wouldn’t be where I am today without it,” Gray said.

Gray graduated from Southeast with a BFA in Musical Theater in December, 2018.

Gray explained how her time at Southeast groomed her for the success she has found.

“River Campus has master classes that allowed me to get a lot of real life experiences that helped me,” Gray said.

A passion for art and expression has to start from somewhere and Gray has a history.

Gray explained her parents were both musical majors which resulted in her growing up in an environment to express herself in different ways.

“I started dancing at 18 months, and I was in my first musical at the age of 6,” Gray said.

Gray’s experience in singing has created her goals and achievements for which she has grown to be proud.

“I am most proud of the singles I’ve released,” Gray said. “It was my goal for a very long time to release two singles, and I did it.”

Not only is Gray modeling and singing, but her acting career is also in the works. She said she is currently working on a film called, “A New Husband For Christmas,” produced by Kyria Williams.

“We started filming in January, and it is planned to be released in November,” Gray said.

Because there are many students at Southeast pursuing the same goal and dream, Gray shared words of encouragement for her fellow Southeast family.

“Make sure that you are very passionate about it,” Gray said. “Each rejection isn’t personal. You are going to get rejected 90% of the time, but don’t give up; go to every audition you can.”

“If you know you gave your all and were prepared, then your drive and push will make you successful,” Gray said.

The voting for Miss Jetset can be found online here: https://www.jetsetmag.com/model-search/.