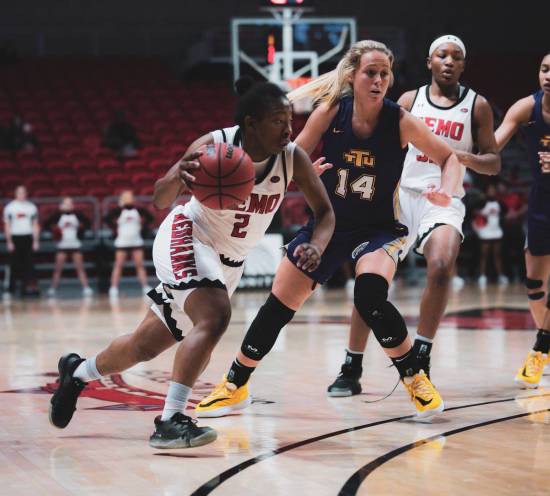 Senior guard Carrie Shephard drives against Tennessee Tech on Feb. 8 at the Show Me Center.
Photo by Jan Salmon

Junior guard Tesia Thompson had a scoring outburst, with a season high 28 points and nine rebounds as the Redhawks picked up the 87-72 victory against the Tennessee Tech Golden Eagles.

The matchup took place on Saturday, Feb. 8, at the Show Me Center and both teams entered the game with Ohio Valley Conference records of 9-2.

The game started fast as the Redhawks made eight consecutive field goals to begin the contest. The Golden Eagles did not shy away from scoring either, making the game 30-26 at the end of the first period. The push for victory came in the second quarter from Southeast as they contained Tennessee Tech to only six points to expand their lead to 15 at the half.

From that point forward, the Redhawks dominated, winning in all aspects of the game including 26 more points in the paint (50-24) and more second-chance points due to their rebounding advantage.

Thompson shot 11-for-15 from the field and 6-of-8 at the free-throw line but was not the only Redhawk to score in double digits as senior guard Carrie Shephard (18), sophomore guard Taelour Pruitt (11) and junior forward LaTrese Saine (10) played their parts.

After winning their ninth game in a row, the team now has the longest win streak in the OVC, and the chemistry is starting to build Southeast into a championship-caliber team.

Southeast coach Rekha Patterson and Thompson talked about the team’s togetherness down the stretch.

“If you look back a few years, this is the highest [in standings] we’ve been in a while,” Thompson said. “We’re tough and gritty enough and this year everyone wants it, and everyone’s happy for each other’s success, that’s what brings us together.”

“We started the year saying we want one healthy heartbeat, and the only way we can do that is by serving each other. The little things matter. I think we’re buying into what we have in our locker room about playing extremely hard, extremely tough, and together … right now we have 14 young ladies who are all in with that and that makes a difference,” Patterson said.