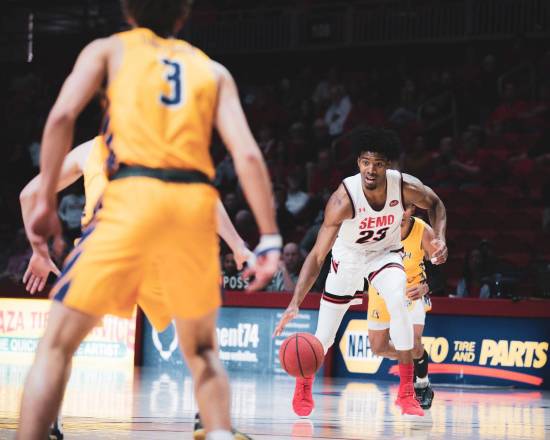 Sophomore guard Nygel Russell brings the ball down court on Feb. 8 at the Show Me Center.
Photo by Jan Salmon

The Southeast men's basketball team lost at home to their Ohio Valley Conference rivals Tennessee Tech in a 62-60 matchup on Saturday, Feb. 8 at the Show Me Center. This game saw a late second-half surge from the Redhawks led by Sophomore guard Nygal Russell.

With 1:40 remaining on the game clock, Russell managed to score a layup to tie the contest between the two teams. Neither team was able to score another bucket until Golden Eagles freshman Dane Quest was fouled with four seconds left on the clock and one second on the shot clock; Quest made both free throw shots sending Tennessee Tech up by two, ultimately winning the game. The Redhawks were outscored in the first half 37-26 by the Golden Eagles but managed to cut the deficit to only two by the end of the game. Southeast still managed to tie the game three times throughout, including late in the second half. Russell obtained a collegiate career high in points scoring 21 on 8-for-11 shooting from the field and 4-for-4 on three-point shots, he spoke about his accomplishments post-game.

“When you change the focus away from yourself and try to help everybody else get going, things will work out in your favor; I hit a few shots and got good passes from my teammates ... I play looking to help others on the team, which in return helped me out as well,” Russell said.

Russell saw an increase in minutes which also led to more productivity on the court. He said, “I feel coach does his best to put on the floor who he feels producing and tonight I did well so I definitely feel like the minutes helped me improve and I’ll continue to improve but I can’t get caught up in who’s in and who’s not, I just have to make the best of every opportunity.”

The Redhawks are in last place in the OVC in terms of overall record (5-20) and conference record (1-11).

They turn their focus to conference foe University of Tennessee Martin (7-16) as they host them at 7:15 p.m. on Feb. 13 at the Show Me Center.