What once was trash is another man's treasure 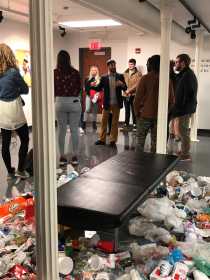 Joshua Newth is an assistant professor of art and has spent the last four years as a foundation coordinator for the Department of Art and Design at Southeast.

What started as a daily routine for him as an artist, turned into a year and a half work of creating his piece, “Act of Unreason.”

The inspiration for his work started from taking walks around Cape Girardeau, seeing litter and trash everywhere and reading books about exploring endangered species in the 1950s.

“As I was walking around Cape, I kept seeing garbage everywhere,” Newth said. “So, the natural progression was to think as much as I could about my and our relationship to our environment.”

Newth wanted to present the nature of little in a non-traditional way and he is starting to show that by putting all the pieces together.

“Because of my interest in the environment and the time I spent outside, I was drawn to the detritus we leave everywhere,” Newth said.

From this, he eventually started to pick up trash continuously on his walks and runs. Last month, he filled up three trash bags worth of garbage only a quarter-mile from his apartment.

“I held on to [trash bags] because I wanted to use the garbage in some capacity,” Newth said. “It wasn’t until I started hanging the work on the walls that I figured this has to be part of the exhibition since it is in the paintings in one-way shape or form.”

With garbage found around Cape Girardeau, the exhibit also featured portraits and two large acrylic paintings. The large acrylics bring the clarity of the clutter from around the Southeast Missouri region area, while the portraits brought realization through people’s eyes.

The portraits contain current and previous students Newth had in his classes with garbage painted on their heads.

“Most of us are drawn to the figure because we are human beings, so we are essentially looking at ourselves when we look at an image of another person,” Newth said. “So, if I put this littler, this trash, the direct result of our society, if I put this garbage on someone's head, it doesn’t belong, so people think about it for a second.”

The art pieces explain how nature is used to make the resources humans need, but nature is still being cluttered.

“I try to create this moment in between having a beautiful image with the colors and the person but also having garbage in there,” Newth said.

Sophomore Jerry Williams, who is displayed in Newth's paintings, has just started getting into painting.

“It was an honor to me, from getting all the responses from the audience and it just feels great,” Williams said.

Newth said that he uses different mediums in his work that best suit the message he is trying to convey, and he tries to coordinate the idea of the environment in his art.

“I am not a fan of putting labels on the type of art people do, but I guess I have moments of pessimistic realism,” Newth said. “When I make art, there is an intuitive and deeply held frustration, and I think that is pessimism. The frustration with the way we take care of the world around us.”

The exhibit, open through Feb. 26, is Newth’s first solo exhibition in Cape Girardeau and is part of the First Friday with the Arts event.