The essence of Shonta Smith: teaching with diversity and inclusion 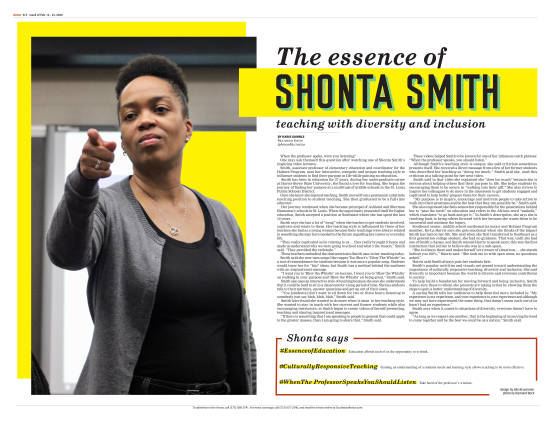 When the professor spoke, were you listening?

One may ask themself this question after watching one of Shonta Smith’s inspiring video lectures.

Smith, associate professor of elementary education and coordinator for the Holmes Program, uses her interactive, energetic and unique teaching style to influence students to find their purpose in life while gaining an education.

Smith has been in education for 27 years, but during her undergraduate career at Harris-Stowe State University, she found a love for teaching. She began the journey of finding her purpose at a multitude of middle schools in the St. Louis Public Schools District.

Once she knew she enjoyed teaching, Smith moved from a permanent substitute teaching position to student teaching. She then graduated to be a full-time educator.

Her journey continued when she became principal of Ashland and Sherman Elementary schools in St. Louis. When the opportunity presented itself for higher education, Smith accepted a position at Southeast where she has spent the last 10 years.

Smith says she has a lot of “swag” when she teaches to get students involved, captivate and relate to them. Her teaching style is influenced by three of her teachers she had as a young woman because their teachings were always related to something she may have needed in the future regarding her career or everyday life.

“They really captivated us by relating to us … they really brought it home and made us understand why we were going to school and what’s the reason,” Smith said. “They provided the rationale.”

These teachers embodied the characteristics Smith uses in her teaching today.

Smith explained she now uses songs like rapper Too Short’s “Blow The Whistle” as a tool of remembrance for students because it was once a popular song. Students would tease her for “hip” ideas, but Smith has a method behind the madness with an inspirational message.

Smith also uses an interactive style of teaching because she says she understands that it could be hard to sit in a classroom for a long period of time. She has students talk to their partners, answer questions and get up out of their seats.

“You [students] don’t want to sit down for two or three hours listening to somebody just say blah, blah, blah,” Smith said.

Smith later found she wanted to do more when it came to her teaching style. She wanted to stay in touch with her current and former students while also encouraging instructors, so Smith began to create videos of herself presenting, teaching and sharing inspirational messages.

“If there is something that I am speaking to people in general that could apply to the greater masses, then I am going to share that,” Smith said.

These videos helped Smith to be known for one of her infamous catch phrases: “When the professor speaks, you should listen.”

Although Smith’s teaching style is unique, she said criticism sometimes presents itself. She received a direct message from a few of her former students who described her teaching as “doing too much.” Smith said she used this criticism as a talking point for her next video.

Smith said in that video she explained she “does too much” because she is serious about helping others find their purpose in life. She helps students by encouraging them to be secure in “walking into their gift.” She also strives to inspire her colleagues to do more in the classroom to get students engaged and captivated to help better prepare them for their careers.

“My purpose is to inspire, encourage and motivate people to take action to walk into their greatness and be the best that they can possibly be,” Smith said.

She also expressed she feels somewhat responsible for the generations behind her to “pass the torch” on education and refers to the African word “sankofa,” which translates “to go back and get it.” In Smith’s description, she says she is reaching back to bring others forward with her because she wants them to be successful and continue the legacy.

Southeast senior, Middle School Mathematics Major and Holmes Program member, Ke-La Harris says she gets emotional when she thinks of the impact Smith has had on her life. She said when she first transferred to Southeast as a first generation college student, she had no guidance. That was, until she had one of Smith’s classes, and Smith wanted Harris to speak more; this was the first interaction that led her to believe she was in a safe space.

“She is always there and makes herself very aware of situations … she stands behind you 100%,” Harris said. “She took me in with open arms, no questions asked.”

Smith’s popular activities and visuals are geared toward understanding the importance of culturally responsive teaching, diversity and inclusion. She said diversity is important because the world is diverse and everyone contributes to society.

To help build a foundation for moving forward and being inclusive, Smith makes sure those to whom she presents are taking action by showing them the steps to gain a better understanding of diversity.

Smith says when it comes to situations of diversity, everyone doesn’t have to agree.

“As long as we respect one another, that is the beginning of us moving forward to come together and be the best we could be as a nation.”