Battle of The Beats 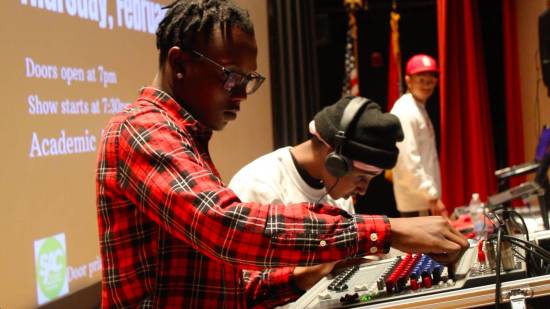 DJ Knowledge working the soundboard at the Battle of the DJ event on Feb. 6 in Academic Hall.
Photo screenshot from video by Karis Gamble

Students of Southeast were given a taste of music at the Battle of the DJs, hosted by the Student Activities Council and Sigma Gamma Rho sorority on Feb. 6.

SAC President Anthony Pulliam said the event was meant to be both cultural and fun for students.

”We wanted to find music that went along with Black History Month,” Pulliam said. ”After a lot of brainstorming, we came up with this idea.”

”I’m looking forward to the DJs battling it out, and I can’t wait to see the students at the end play their songs,” President of Sigma Gamma Rho Raven Cole said.

“Make sure you have fun, ” DJ Keynote, a Southeast student, said. “You have your rough times. Don’t give up, just keep going. Especially if it’s something you really enjoy doing.”

A good part of the marketing for the Battle of the DJs came from social media, like Snapchat, where sophomores Jessica Pierre and Indya Smith found out about the event.

“I wanted to come because I like music and the title seemed really interesting,” Pierre said.

“This semester, I really want to try to go to more events on campus, and when I saw this one, I really wanted to go,” Smith said.

During the Battle of the DJs, there were four rounds. Each DJ had two minutes to play music to the relating genre that the audience gave them, and the one who got the most votes from the audience went on to the next round. The last DJ standing was crowned the King of the DJs. The audience voted by waving the glow sticks they received at the door after every single performance.

The battle finished and DJ Knowledge was crowned King of the DJs. After he won, students had the chance to battle each other for prizes.

This event was popular among students that went to the event. SAC’s next event is Cuddle Friends, where participants will be able to make their own stuffed animals Feb 10 at the University Lobby.