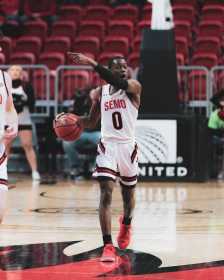 Sophomore guard Alex Caldwell directing the offense against UT Martin on Feb. 13 at the Show Me Center.
Photo by Jan Salmon

The Southeast men’s basketball team won at home against their Ohio Valley Conference opponents University of Tennessee-Martin with a score of 74-72 on Saturday, Feb. 13 at the Show Me Center.

“I missed a few shots earlier in the game,” Caldwell said. “Then I came down and went short on a floater. I felt like I needed to have amnesia. My team looks for me to take big shots and make big shots. So that’s what I did.”

Caldwell’s quick points brought the Redhawks within a single point. Southeast took the lead on a layup by senior guard Skyler Hogan.

“I just told them a couple stops wins us the game, and it was the truth. We got a few stops down the stretch and got one and done,” assistant coach Keith Pickens said. “We were able to overcome, there was some big time plays by Alex and Skyler in our press. They came up with a turnover and we got a layup to take the lead.”

Head coach Rick Ray was unable to attend due to sickness. Pickens stepped into the roll.

This season has not been filled with many wins, and this one helped the Redhawks mature as a team, according to Pickens.

“I think we excelled at growing up and maturing within the game,” Pickens said. “At times this season we would have probably quit or gave in, but we didn’t. So, I thought we grew up during the game. We can grow in the area of not falling behind.”

The Redhawks will look to carry the momentum of this win going forward.

“It can help us good going into the game Saturday versus SIU-E,” Caldwell said. “Going into that game I feel like this gives us a lot of momentum.”