Catapult After Hours: Crocodykes Bite Back 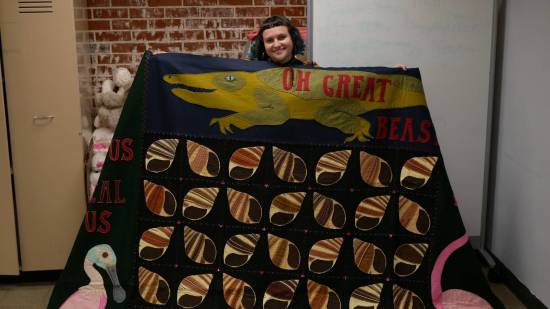 Artist Janie Stamm holds her quilt in honor of the victims of the Pulse nightclub shooting in 2016 and to commemorate the “Act Up against AIDS” movement of the 1990s.
Photo by Ethan Hutchison

Stamm, a self-described “craftivist,” reminisced with the audience of 20 on her artistic journey from 2012 to 2020, exploring environmental imagery from her home state of Florida, common craft supplies and most importantly, queer culture.

She began her presentation with drawing a snake every day for the entirety of 2012. While doing so, she pulled herself out of a debilitating art block and came out as a lesbian. Since then, she has worked on pieces such as an 8-foot papier-mâché alligator, a quilt in honor of the victims of the Pulse nightclub shooting in Orlando, Florida, in 2016, and a vest emblazoned with “Crocodykes bite back.”

“When Donald Trump said, ‘Grab them by the pussy,’ back in 2017, I knew I had to respond with my art. Since then, “Crocodykes bite back” has become this performative identity where I represent this made up lesbian motorcycle gang,” Stamm said.

Southeast art students engaged with Stamm and her work, to the point of extending the lecture by nearly 30 minutes asking questions about get processes and ideals.

“I seek to preserve Florida’s queer and environmental history through my art,” Stamm said. “I hope to encourage young artists to bring crafts into conversations about art. Fine art materials aren’t everything.”

The theme of fabric art is rampant in Stamm’s work. Her is filled with plaster oranges in collars, fashion modeled after mosquito suits and a strict ‘Touch whatever you’d like’ policy. She brought several works with her to the lecture so students could touch them to teach art doesn’t have to be fragile and untouchable.

Catapult Creative House hosts its next After Hours artist lecture March 12 at 7 p.m.