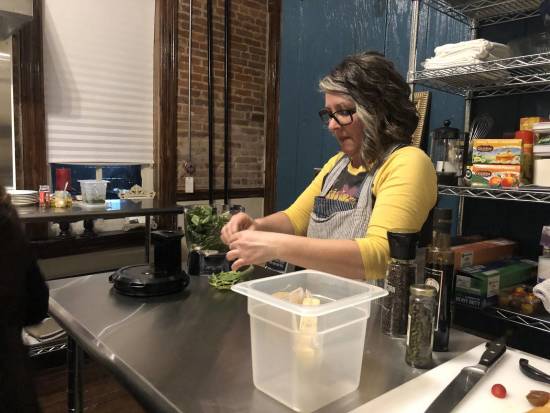 Lisa Essmyer prepares basil in her Fūdio kitchen at the Indie House as part of the First Friday event on Feb. 7 in Cape Girardeau.
Photo by Madison Stuerman

While she now instructs hospitality management courses and owns a business, the beginning of her career did not look like it was heading this direction. Essmyer began college at the University of Missouri - Columbia with aspirations to become an art teacher. There, she earned a Bachelor of Science degree in arts education and a Masters of Education at Mizzou. She then moved to Orlando, Florida, in order to pursue a degree in culinary school at Le Cordon Bleu. Much of her valuable cooking experience comes from the Grande Lakes Ritz-Carlton in Orlando.

With her education experience and cooking knowledge, Essmyer felt the urge to teach how to cook. When an opportunity to be an adjunct instructor presented itself at Southeast, she jumped at the opportunity and began teaching a few credit hours each semester, and was later offered a regular, non-tenure track position.

The birth of Fūdio came to fruition from the requests of friends and family, who asked Essmyer to offer cooking classes. Outside of her lab facilities provided by the university, she simply did not have the space to offer the classes.

Some of Essmyer’s family pushed for the start of the business, and after pitching the idea to the SmallBusiness and Technology Development Center at Southeast, she won $500 toward the upstart of what would later become Fūdio.

Fūdio is Essmyer’s “passion project,” where she hopes to lead her students by example, while also turning a profit. She gives her students real-world experience in her classes and sets an example by owning a business as well.

Essmyer brings her school work along with her to the studio and her business comes with her to school. This way she can try her best to focus on the two very demanding careers.

“The busier you are, the more time you find to do things,” Essmyer said.

As a new business owner, she said she has to say “no” to more things that are not cost-effective.

“You know, now, I have to take things into consideration for how much time I have and say no to more in order to keep things cost-effective,” Essmyer says.

Essmyer’s concept for her Fūdio restaurant is not only to make meals for others to buy fresh off the stove but to allow intuitive customizability to a variety of services.

Such services include catering, meal preparation and cooking classes.

“I want people to come in [to Fūdio], and I say ‘Welcome to my kitchen’ without them actually being in my kitchen at home,” Essmyer said.

Essmyer cooks a variety of food including vegetarian meals and offers meat and meatless options during weekly brunches posted to her Facebook Page every Sunday. She said she plans to cook what she feels like eating that week and hopes everyone who comes in wants some, too.

Chef Essmyer also has events she hosts that are available for reservation through her Fūdio Facebook page. Recently she hosted a Friday night cocktail hour as well as a “Brolentine’s/Galentine’s Brunch” for a post-Valentine’s Day pick me up.

Fūdio is located inside the Indie House, at 605 Broadway St. in Cape Girardeau, and offers brunch services Wednesdays and Thursdays from 11 a.m. to 2 p.m.