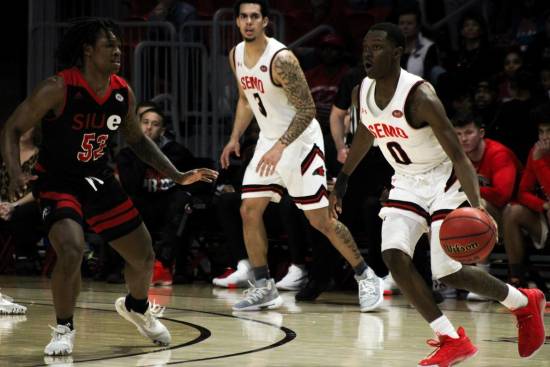 Sophomore guard Alex Caldwell surveys the court against an SIUE defender on Feb. 15 at the Show Me Center.
Photo by Ramond Buck

The Southeast men’s basketball team squeaked out a hard-fought victory over the Southern Illinois University-Edwardsville Cougars 75-71 on Saturday, Feb. 15, at the Show Me Center.

The Redhawks have now won three of their last four games, and are 3-11 in Ohio Valley Conference play after starting 0-10.

It was a physical affair both ways as Southeast (7-20) and SIU-E (7-20) combined for 39 personal fouls, 58 free throw attempts and two technical fouls, one for each side.

Southeast coach Keith Pickens, who filled in for Southeast head coach Rick Ray for the second straight game because of illness, said the Redhawks game plan was to be physical from the start.

“We told [the players] if you want to walk out of here with a win tomorrow, we can’t go get pushed around. We have to be chippy.”

The difference in the game came at the free throw line, where Southeast shot 29-of-36 compared to SIU-E’s 15-of-22 performance at the charity stripe.

The defense was especially present in the second half as the Redhawks shot 6-for-20 from the field and the Cougars went 9-for-33.

Southeast weathered two seperate stretches in the second half where they went longer than six minutes without a basket. Their first bucket of the second half came with 13:37 left on the clock on a three by sophomore guard Nygel Russell. Their next make did not come until a putback dunk by sophomore forward Sage Tolbert with 6:39 remaining.

“Everybody stayed together,” redshirt-senior guard Skyler Hogan said. “Nobody put their heads down, nobody pointed a finger, we just all kept guarding and then eventually the offense came.”

Despite the rough shooting, the Redhawks stretched the lead to 54-44, their biggest of the night, when freshman guard DQ Nicholas hit a free throw with 12:22 remaining.

“Every team makes a run,” Pickens said. “It’s about what we can do to stop it as quickly as possible, and stay composed. We overcame it and we were able to finish the game.”

Following the SIU-E run, neither team led by more than five points the rest of the way. Six of the game’s 11 ties came in the final nine minutes.

Southeast went ahead for good when a layup by senior forward Quatarrius Wilson broke a 69-69 tie with 48 seconds remaining. Sophomore guard Alex Caldwell iced the game with four free throws in the final seconds.

Hogan led the Redhawks in scoring, finishing with 17 points, including 15 in the first half. Hogan has now finished with his two highest scoring outputs on the year in back-to-back games following a 21 point outing on Thursday against the University of Tennessee-Martin.

“The coaches want me to keep shooting,” Hogan said. “My teammates have done a great job of finding me these past two games and I’ve been knocking them down. Hats off to my coaches and teammates for that.”

Southeast now sits two games behind Jacksonville State University (10-17, 5-9 OVC) and Eastern Illinois University (12-14, 5-9 OVC), who are tied for seventh in the OVC, with four games remaining. The top eight teams qualify for the OVC tournament.

“We know what we got in that locker room,” Hogan said. “Everybody stayed bought in, even if the result doesn’t come, it’s going to come as it’s been coming. Everybody stayed together, and if we stay together we can beat anybody.”

The Redhawks will look to close that gap by a game when they hit the road to play Jacksonville State on Thursday, Feb. 20, before heading to Tennessee Tech University on Saturday, Feb. 22.