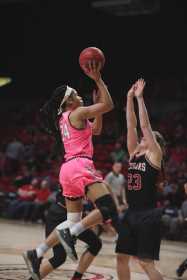 The Southeast women’s basketball team led from start to finish as they defeated the Southern Illinois University-Edwardsville Cougars 80-57 on Saturday, Feb. 15 at the Show-Me Center.

This win was the Redhawks 20th of the year, the first time they have reached that benchmark since the 2007-08 season.

“That’s pretty cool,” redshirt-senior guard Carrie Shephard said. “That’s not our goal, but it’s a great achievement for our program. It speaks well to what we are trying to build here.”

Shephard along with junior guard Tesia Thompson and sophomore guard Taelour Pruitt did most of the damage for the Redhawks. Thompson finished with 23 points, Shepard ended with 19 points and Pruitt had 17 points. Those three outscored SIUE (3-22) by themselves, ending with a 59-57 advantage.

Shephard knocked down three 3-pointers in the game, the third one being her 150th career make in a Redhawks uniform. She is the fourth Southeast player to accomplish that feat.

“She works so hard for everything,” Pruitt said of Shephard. “She deserves all of this.”

Shephard was not the only one who was on target from deep, Pruitt also made a career-high five 3-pointers in the game. Her first came on the Redhawks opening possession, which sparked an 11-3 run for Southeast.

The Cougars went on a 10-3 run of their own to get within a point of the Redhawks at 14-13, but Southeast scored the final five points of the first and led 19-13 at the end of one.

The Redhawks then pushed the lead to double figures in the second quarter and SIU-E failed to get any closer as Southeast maintained a double-digit lead the entire second half.

Despite having a double-digit halftime lead, Southeast did not take their foot off of the gas.

“When you’re used to losing and you’re finally winning, you just don’t let up,” Thompson said. “Nobody let up on us when we were losing, so put our foot on their necks and keep it going.”

After a dramatic 71-69 victory over the conference leading University of Tennessee-Martin on Thursday, some may have expected a letdown from the Redhawks against the last place Cougars. Southeast coach Rehka Patterson said this team has learned from making that same mistake in years past.

“We have a veteran squad who has been through the ups and downs,” Patterson said. “They’ve overlooked opponents in the past and I think they’ve learned from that.”

Freshmen guards Roshala Scott and Sophie Bussard provided a lot of energy off the bench and helped extend the lead in the second quarter.

“It is nice to have two freshmen who come in and give you great energy,” Patterson said. “I’m so impressed at those two for their ability to sacrifice for what this team needed.”

Bussard finished with team-high eight rebounds and five assists. Scott ended up second on the team with five rebounds and four assists to go with 11 points.

With the win, Southeast now has an 11-game winning streak and is tied for first place in the Ohio Valley Conference with the University of Tennessee-Martin and Belmont University. All three teams are 11-2 in OVC play.

When asked how it felt to be at the top of the conference with an 11-game winning streak, Pruitt didn’t mince words, “We’re not finished yet, so we’re not satisfied.”

The Redhawks hit the road next week, traveling to Jacksonville State University on Thursday, Feb. 20, before heading to Tennessee Tech University on Saturday, Feb. 22. Southeast has four regular season games remaining before OVC Tournament play begins. The Redhawks have already clinched their spot in the OVC tournament.