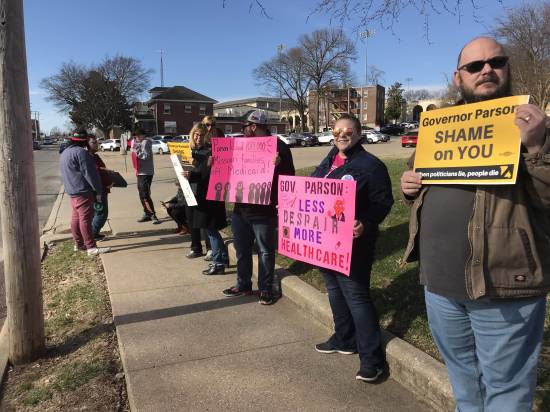 A group of constituents hold signs to demonstrate opposition with recent political decisions on Broadway outside the Wehking Alumni Center on Southeast's campus Wednesday, Feb. 19.
Photo by Brooke Holford

According to a news release from Parson’s office, the topics were part of the ONDCP’s Rural Action Guide, which is a guide to provide leaders in rural communities with background information, recommended action steps and promising practices around several key topics related to drug addiction. It is intended to educate rural leaders on the challenges of addiction and empower them to take action in their own communities.

Parson said those were among many issues discussed, as well as how those issues tie into healthcare, workforce development and community infrastructure.

Carroll said these are local issues, which ought to be addressed at the local level, but stressed federal resources are available to support residents in Southeast Missouri. He added it was important for them to meet in Cape Girardeau so the politicians could show residents they are not just viewed as numbers or statistics, but as individual people.

However, some Cape Girardeau community members felt the opposite — they felt they were being ignored, and the closed meeting was “secretive” because residents were not able to hear the discussion or have any input.

As a result, a group of 12 Cape Girardeans gathered outside the Wehking Alumni Center from 12:30 to 3 p.m. Wednesday with hand-written signs and bullhorns.

Andy Leighton, vice chair for public relations of the Cape Girardeau County Democrats, said the constituents organized a demonstration during the meeting “to make sure participants hear our concerns.”

“We’re here to say, ‘No. Why won’t you let us in? Why won’t you let us hear what you have to say? What is going on? Why are you being so closed and secretive?’” Cape Girardeau resident and demonstrator Courtney Pratt said. “We clearly have our own opinions and are very willing and wanting to have our voices heard, but they’re not letting us.”

As Parson and other politicians left campus Wednesday, the demonstrators also yelled the phrase, “When politicians lie, people die!”

Parson denied claims of purposely shutting anybody out and said the meeting was closed so they could ensure a productive meeting in a short amount of time.