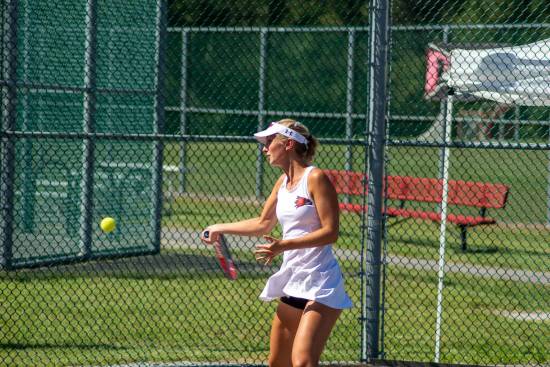 Kseniya Zonova is a senior tennis player at Southeast, however, her road to being a Redhawk was not a typical one. She lived in Ukraine for the first 15 years of her life, then she went to high school for a year in New York. She won the New York high school state championship in tennis, then returned to Ukraine to finish high school. Then it was back to the United States for college.

So how did Zonova, who at the time had only lived in Ukraine and New York, end up in Cape Girardeau, Missouri, at Southeast Missouri State University?

“[Coach] found my video on YouTube, and contacted me,” Zonova said. “I had been in contact with another team, but the coach was ignoring me, and so I signed with SEMO.”

Southeast coach Mary Beth Gunn knew exactly what she had in Zonova as soon as she signed.

“When she signed with us, I knew our program was going to be on the rise, that we were a program that could turn around,” Gunn said.

In the year before Zonova came to Southeast, the tennis team had a record of 1-19 overall, including an 0-10 Ohio Valley Conference record. The program had not been at or above a .500 record for a season since 2006, when the team went 11-11. However, none of those teams had Zonova on the roster.

In Zonova’s freshman season, the Redhawks jumped up to a 13-8 mark with a 5-4 OVC record. Zonova personally went 13-7 in singles and 10-6 in doubles during the season. The Southeast tennis program had immediately turned around, just as Gunn had predicted.

As Zonova heads into her senior season, she has 37 career singles wins, ranking her seventh on the all-time Redhawks win list. If she wins 13 singles matches this season — which she has already done two out of three seasons in her career — she will become the fourth Southeast player to ever reach 50 career singles wins.

When asked about it, Zonova didn’t have any idea she had that many wins or that she could possibly get to 50 wins.

“I don’t really follow that,” Zonova said. “Here, you really feel that team spirit, so I was mostly playing for my team.”

Zonova could still get to the 50-win benchmark even if she’s not focused on it, but don’t expect her to be bragging about it to the future generations.

“I mean it’s cool, but it’s not like I will be telling that to my future grandkids,” Zonova said.

Zonova is focused on her senior season, where she is the only senior on the team, and one of only two upperclassmen. But she doesn’t mind being in a leadership role.

“I don’t feel pressure really, I just like it,” Zonova said. “I feel like I can help them in some way so it’s definitely not pressure; it’s just a nice experience to have.”

Gunn knows the team is in good hands even though Zonova is the only senior player.

“She’s very vocal on the court, and she can inspire her teammates to play their best because she is leaving it all out there,” Gunn said. “She’s really helped build the culture of this team, and she passes that on to the freshmen and sophomores.”

As for what comes next? Only time will tell. Zonova has set herself up for success after college. She has a 4.0 GPA while majoring in finance,and she has earned three OVC Academic Medal of Honors. Zonova said she has been applying for jobs and internships and sees herself in business analytics or data analytics. If those don’t come through, she’s going to get her master’s degree.

“Any employer or any graduate school would be lucky to have her,” Gunn said. “The sky’s the limit for her, she can be successful in whatever she decides to do.”

However, before all that comes, she’s got her senior season of tennis to play and a career singles win record to break.

“She’s earned everything she’s gotten, she’s put in the time, the effort, the energy,” Gunn said. “I’m super proud of her career, and she’s been fantastic. I’m really going to miss her.”