"If it's fake, it's not news": Parry lectures 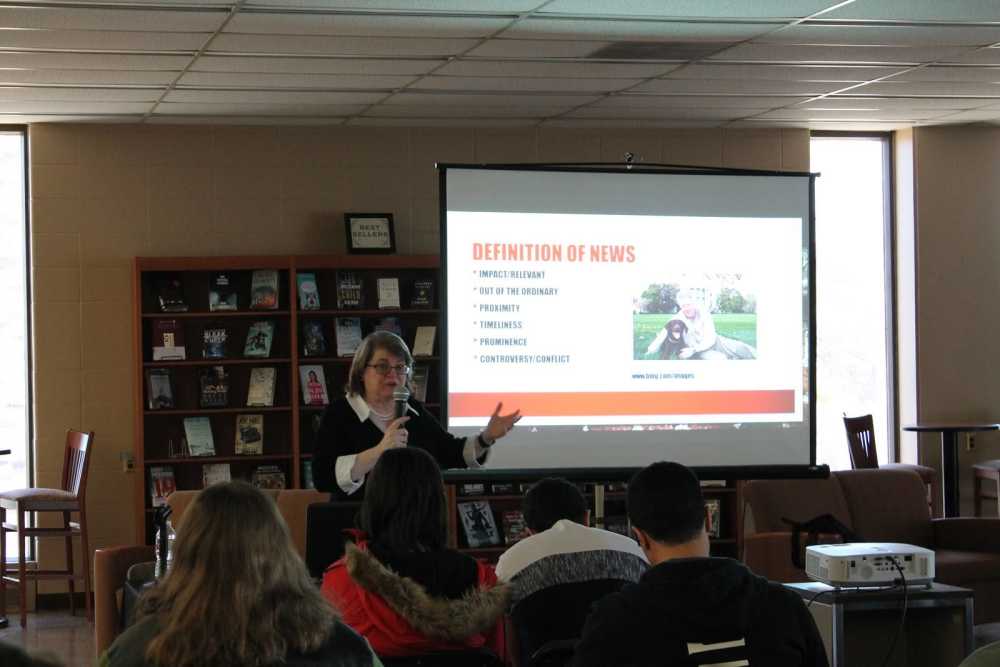 Pam Parry, chair of the Department of Mass Media, delivers a lecture on fake news at Kent Library on Wednesday, Feb. 19.
Photo by Matt Wagner

In a public lecture held Feb. 19, Pam Parry, chair of the Department of Mass Media, detailed the history of “fake news.”

The Wednesday lecture titled “Fake News and Other Myths: The Evolution of Journalism in the 21st Century.” was the first of this semester’s Athenaeum Lecture Series. Since 2007, the series has been highlighting the experience and knowledge of Southeast faculty, staff and students.

Providing her audience with examples of journalists such as Janet Cooke and Steven Glass, who have fabricated or misrepresented stories, Parry said that, while fake news happens from time to time, the term is misleading.

“How many people believe in fake news, not that you want it, but believe that it exists?” Parry asked her audience.

As some of the crowd raised their hands, Parry conceded, “The truth is it does [exist] on one level, in a sense… if it’s fake it's not news.”

Parry told a story about her nephew's reaction to the death of Kobe Bryant. The 14-year-old’s immediate reaction was to discredit the reports and label it “fake news.”

“This is seeping through our culture,” Parry said. “There is a war on journalism, and journalism better start fighting back, and the way they fight back is being good at their jobs, providing reliable information and being good journalists.”

Throughout her lecture, Parry laid out what a “good journalist” should be; one who seeks out the truth with integrity for the purpose of informing the public.

Giving a brief crash course on the history of the field, Parry touched on the major shifts of American journalism over the last 250 years and how each era led to the digital age of today.

“Journalists are a big part of what this nation was built on. They are people who believe in the [public] trust and some have betrayed that trust,” Parry said.

Covering everything from Henry VIII and Queen Elizabeth to Thomas Jefferson her own family, Parry spoke about the use of the term “Fake News” by those in power to delegitimize critics, as well as the public's use of the phrase when reacting to unpleasant news.

Parry said that, while some politicians have been mistreated in the media historically, when politicians and public figures label something as fake news, it is often an attempt to take the public's attention off of them and place it on the media.

Motassin Daher, a student at the International Administrations Building, said he enjoyed the event and gained new insights into the field.

“I think this is an important topic because now we are living on social media — there is a lot of information,” Daher said. “It is important for people living these days to understand and to analyze their information.”

Athenaeum Committee Chairperson Susan Welker said while the series is a month behind schedule, they will hold three more lectures before the end of April.

The next lecture will be given by Courtney Kisat, associate professor in history and anthropology, on March 25, on the topic of the local suffragette movement.