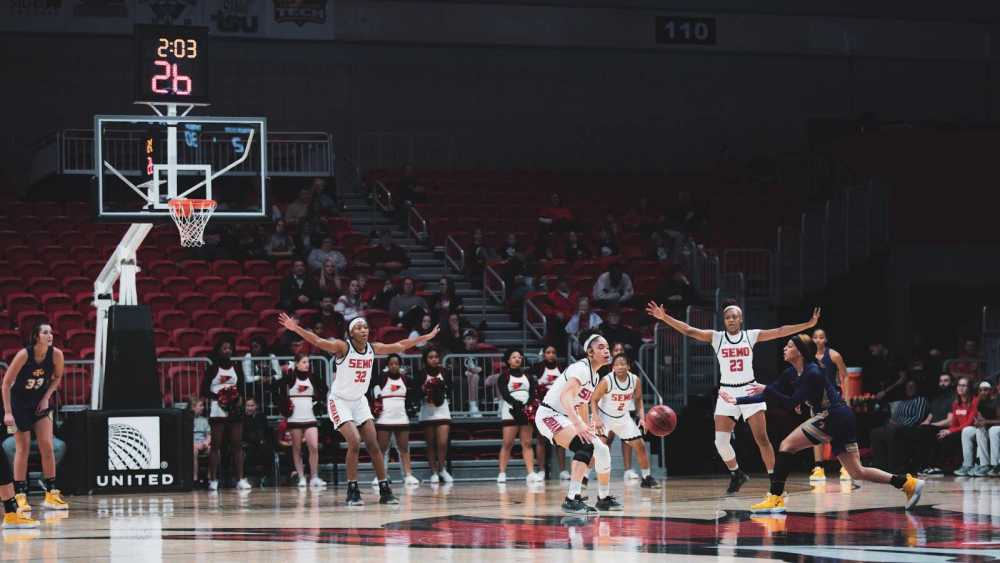 Junior guard Tesia Thompson and the Redhawks defense guard against the Tennessee Tech offense on Feb. 8 at the Show Me Center.
Photo by Jan Salmon

Connection within one another on the Southeast women’s basketball team has been the key to their success this season.

Because of that connection the team has, Southeast coach Rekha Patterson believes that is what has helped earn a 21-6 overall record and a 13-3 Ohio Valley Conference record, sharing the No. 1 spot with Belmont University and the University of Tennessee at Martin.

According to Patterson, there is more chemistry on the current team than in years past.

The focus for the current season is to take each weekend one game at a time and finish 1-0 on Thursday and 1-0 on Saturday.

“It’s just focusing on us and making sure that on Thursday’s we do whatever it takes to be 1-0,” Patterson said. “Then, Friday, we get ready for our Saturday opponent, and we do whatever it takes to be 1-0. We can’t look ahead, we’ve got to stay in the moment and stay focused on what’s right in front of us and then the rest will take care of itself.”

The success in the athletic department as a whole has bred a winning desire within the women’s basketball program, according to Patterson.

“Winning sort of breeds winning. From a year ago when softball won, to this fall where volleyball, soccer and football [won], there is excitement and energy,” Patterson said. “Being an athlete on this campus, we just want to continue to put our best foot out there and give everything we can and make sure that the students, faculty and this community, they're all proud of the effort that we are displaying.”

Redshirt-senior Carrie Shephardwho came back from a knee injury in the 2018-2019 season as her first year playing at Southeast. Shephard has built off of that year becoming a major key in this season's success.

“She's finally able to just represent SEMO the way she wants to and leave it all on the floor,” Patterson said. “But her leadership and her ability to be vocal and take care of a lot of things in the locker room, or on the floor when the coaches may not be able to do it [makes her] a huge contributor.”

In conference play, Shephard is fifth in scoring with 423 points and averaging 16.9 per game, fourth in assists (88), first in steals (59) and first in three-point field goals made (77).

Alongside Shephard to help lead the Redhawks is junior guard Tesia Thompson. Thompson led the conference in points last season with 529, averaging 18.2 points per game as well as leading the Redhawks in scoring average (18.2), rebounds (219) and field goals made (182).

Patterson believes the versatility of Thompson is what makes her one of the top players in the OVC.

The intelligence of each player on the team has also led to success this season. To Patterson, this aspect is what makes the team so special.

“I enjoyed watching them grow and care about each other and serve each other and look out for each other,” Patterson said. “I think when they leave us that they can take that with them. [They will] remember how this season feels. And because they are constantly serving others, I think they will remember those moments more.”