Graduate enrollment expected to rise due to innovations within the program 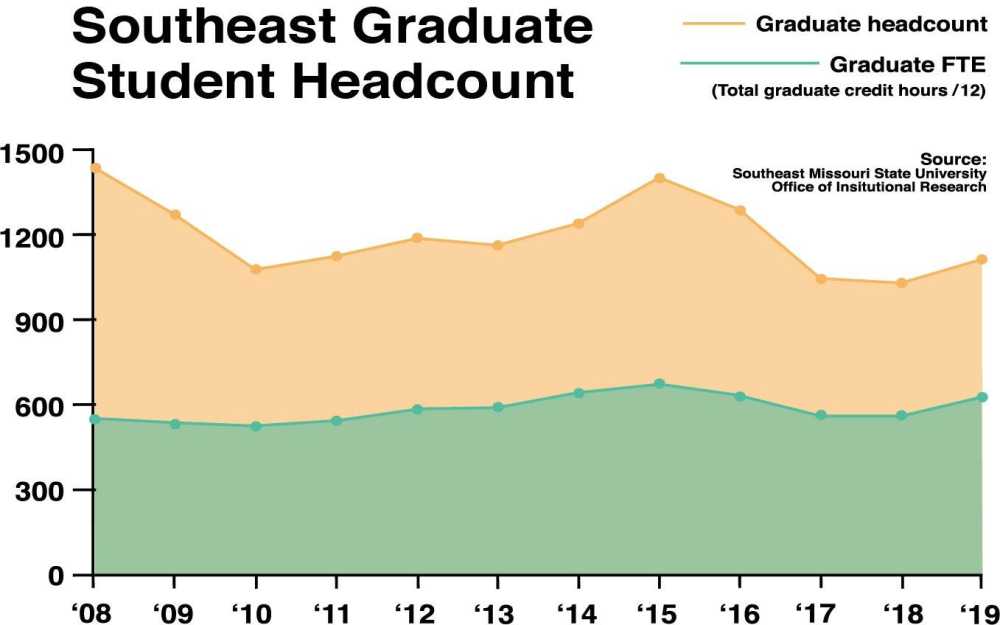 In fall 2019, Southeast’s graduate program saw its first increase in enrollment since 2015.

The program is still at its lowest headcount since 2011, but Southeast Provost Mike Godard is hopeful enrollment will continue to rise.

Vice president for Enrollment Management and Student Success Deborah Below and Godard agreed headcount isn’t the most important statistic when it comes to the graduate program, due to a large number of participants being part-time.

To give a better representation of part time and full time students at Southeast, the university instead calculates the full time equivalent (FTE).

Godard said he expects enrollment in the graduate program to continue to see an increase due to stackable credentials, flexible learning and the newly added Masters of Science in Applied Computer Science degree.

“Stackable credentials,” as Godard described them, are when a student's undergraduate hours apply to a graduate degree.

When students learn they have completed some of their graduate classes, Godard explained they may feel more inclined to go ahead and finish the degree. Stackable credentials may also apply to degrees outside a student’s area of study.

“We want to provide a pathway for students to get these stackable credentials and eventually work their way toward a graduate degree, even if that's not an immediate plan of theirs,” Godard said.

However, there is more to flexible learning than online coursework. “It can also be how we organize the delivery of that course,” Godard explained.

A course can be taken in a few different lengths: four weeks, eight weeks and sixteen weeks. Part of flexible learning is helping find the right workload for each student and offering different ways for that student to take a course.

This type of class delivery is especially appealing to graduate students, Godard said, because many work while completing the program.

In fall 2019, 661 out of 1,113 Southeast graduate students were part-time students, according to the Office of Institutional Research at Southeast, which records all enrollment reports at the university.

The graduate program also added a new major in 2019, the Masters in Applied Computer Science, which has quickly become one of the most popular graduate degrees with 119 students. The next closest highest enrollment in a graduate program at Southeast is Teaching English to Speakers of Other Languages (TESOL) with 56 students enrolled.

Below said the rapid spike in numbers can also partially be attributed to the increase of international students joining the graduate program.

“A large percentage of the students enrolled in [applied computer science] are graduate international students,” Below said.

Below said university leadership feels it is important to offer new programs when the demand is high enough.

Godard said specific criteria must be met in order to create a graduate program.

“We look at demand in terms of students saying ‘I’m interested in that,’” Godard said. “We look at capacity in terms of what our ability is as an institution to be able to deliver that quality academic experience.”

Godard said the last criteria they look for is demand from the industry that the major applies to.

Although the graduate enrollment headcount has been in a decline since 2015, Below and Godard agreed full-time equivalent (FTE) is a more important statistic to consider when looking at enrollment. FTE is a measurement equal to one student enrolled full time for one academic year.

Since 661 of the 1,113 students in the graduate program at Southeast are part-time students, headcount can be misleading as to how much income the university receives from its graduate students.

Those numbers reflect Southeast’s total headcount, whether a student is full-time or in high school and taking one class, according to Mangels. Southeast and other Missouri institutions use many factors to calculate FTE to give a better representation of part-time students and full-time students for budgeting purposes.

“If you enroll in one [three credit-hour] class, the amount of revenue the university realizes is very different than if I enrolled in 12 [credit hours],” Below said. “So, to get a better, fair feel for how many credit hours we are generating, we look at FTE counts.”

According to Godard, it is likely the department will undergo more changes in the future, as Southeast is currently seeking a new Dean of Graduate Studies and Research.

The deadline to apply was Dec. 2, and the position will become available on July 1 and remain open until filled. The position was last held by the former vice provost Chuck McAllister, who served as interim dean from 2016 to 2017.