When Southeast alumna Ashley Books accepted an invitation to serve as an English teacher with the Peace Corps in China, she was told to ‘make it her home.’ Less than a year later, she would be evacuated and forced to leave her new home in fear caused by the coronavirus outbreak.

Books had been volunteering in Chengdu, a city in the Sichuan Province, at Chengdu University of Information Technology as a part of the China Program since she joined the Peace Corps in June.

She graduated from Southeast in the winter of 2014, with degrees in English literature and multimedia journalism. Prior to joining the Peace Corps, Books worked for a few years as a journalist for the USA Today network in Pennsylvania.

Books recalls the emergence of the coronavirus in early January and how it grew rapidly within a matter of weeks, bringing with it a wave of fear and paranoia to the people in China.

On Jan. 9, Books said she attended a medical session at service training while in China, a two-week long program where volunteers from different provinces come together and talk about ways they can improve. The Peace Corps doctor talked to the volunteers about traveling and watching out for diseases such as malaria, and she mentioned there was some type of “pneumonia or virus thing happening.”

“As of that point, we didn’t really know what was going on,” Books said. “It didn’t seem like it was a big deal.”

She said they were told to just be aware of it and be careful, but travel to China wasn’t restricted, so Books and her fellow volunteers were ready to start their mission.

“Between the 16th and the 24th [of January], things drastically took a turn and that virus started infecting more and more people, and we started hearing more and more about it,” Books said. 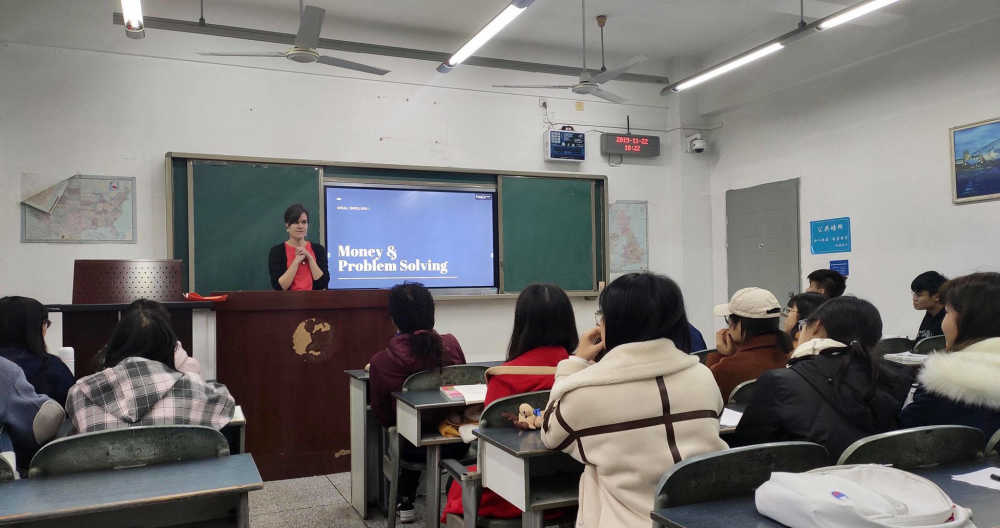 Ashley Books teaches Oral English to a group of freshmen at the Chengdu University of Information Technology in November 2019. Photo submitted by Ashley Books

On Jan. 17, in the midst of the coronavirus outbreak, Books and her co-volunteers learned the China Program was being “graduated,” so the volunteers stations there would finish their service and the program would be phased-out.

Books was scheduled to fly to Guangzhou, a city in the Guangdong Province, on Jan. 24 for the Spring Festival, otherwise known as Chinese New Year.

She remembers calling her doctor a few days before she was supposed to fly out to make sure it was safe after multiple cases of the virus were reported in Guangzhou. Her doctor didn’t share her concerns and said she would be fine as long as she took precautions such as wearing a mask and using hand sanitizer.

“The day before I was supposed to leave, the number [of coronavirus cases] shot up astronomically in Guangzhou, and at that point, there were like 40 to 50 [cases],” Books said. “In retrospect, that isn’t really a lot now, but then, it was just kind of multiplying and it was really worrisome.”

Despite her concerns, she was “bound and determined” to go to Guangzhou, so she flew out — religiously following the rules of the doctor.

However, when she arrived in Guangzhou — a major city in one of the most populated countries in the world — it was a “ghost town.”

She recalled being told when she first moved to China that during the Spring Festival, most towns become like ghost towns. People leave the cities to return home and visit relatives, Books explained. But she soon learned the holiday wasn’t the only reason for the empty cities.

“For the first Friday I was there, I was too scared to go out of my hotel room at that point,” Books said. “At that point, the virus had become a bigger problem, and it was something that was more of a concern.”

Public health concerns had reached a point where every time Books got on the metro, she had to get her temperature taken because health workers were constantly screening commuters who used public transportation. She also saw many people wearing face masks and people who had to have their temperatures taken upon entry into certain buildings or apartments.

Books was still determined to enjoy at least part of her trip, so on Saturday, Jan. 25, she went to visit some of the tourist attractions and attempted to attend the Lantern Festival and the Flower Festival, but everywhere she went was shut down because of the virus — even businesses were shutting down.

She had planned to spend four days in Guangzhou, but upon realizing how serious the virus really was, she rushed back to her hotel room and refused to leave until checking out of the hotel two days early.

Books thought she would feel better once she returned to her apartment in Chengdu, but she didn’t leave the apartment for two days after that due to fear, paranoia and confusion about what was going on.

“I felt like I was going crazy because I didn’t really want to be around people — I was scared to go out,” Books said, noting she suffered from extreme paranoia and was terrified she was going to become infected with the virus.

Because symptoms of the coronavirus resemble symptoms of influenza or other common illnesses, Books became frightened every time she felt warm, coughed or had a dry throat.

She said she turned to the news cycle to try to find some relief, but she just got more scared and stressed.

She felt the American media, in particular, highlighted the amount of people who died from the virus, but didn’t focus as much on how many people were cured. Books felt some articles in the news made assumptions about China and Chinese people, which she said came across as racist.

“Not only was I sitting in my apartment — being paranoid that I caught the virus — I was also being scared, like ridiculously, by the news and I was being angered by what it was saying about the Chinese people,” Books said.

From Jan. 26 to 28, she said the volunteers received messages from their managers explaining what was going on with the virus and procedures that needed to be taken. It seemed to Books like they were just going to “wait it out,” at least until the Chinese government started locking down cities and restricting travel in China, as well as to and from America.

“That’s when it got scary, because we were all like, ‘Well, what if this becomes really big and we can’t get out of here?’” Books recalled asking with her peers.

She said they received the note on the night of Jan. 27, which said the volunteers were going to “consolidate,” not evacuate at that point, to Bangkok, Thailand.

They had roughly 24 hours to pack what they could and leave China, because Books said volunteers flew to Bangkok on the morning of Jan. 29. At that point, Books said the volunteers thought they’d be able to come back and get their things later, so many left a lot of their stuff behind.

When the volunteers flew to Bangkok on Jan. 29, they were told to wear masks on the airplanes and were screened everywhere they went in order to get on the plane.

Books said after two to three days in Thailand, the volunteers were told their services were being ended and they were all being evacuated back to America.

“So, in this three-week time period, we were told that we were graduating our program which made us all really upset, the coronavirus grew exponentially, we were consolidated to Thailand and then we were told, ‘OK, the program is just going to end; you’re all closing out your service and going back to America,’” Books recalled.

The volunteers were told they had to be out of the hotel by Feb. 7 at noon, which meant they were all sent back to America having not spent enough time outside of China at that point to be considered safe — Books said 14 days was the suggested time frame — and they had to receive extra screening at the airport.

Upon returning to the United States, Books said she was still feeling some of the effects of the trauma she had experienced. She was depressed and paranoid, had mood swings and had trouble sleeping and eating. She is still trying to process everything that happened.

“It’s just processing and dealing with all this and acknowledging that this all happened and this was real, and it’s something that we are going to have to deal with,” Books said. “I don’t know if it will affect us for the rest of our lives, or if we will come out of this and everything will go back to normal.”

Books returned to her home in St. Louis to stay with her parents and spend some much-needed recovery time with her family before finding a new job. She is still waiting for the bulk of her possessions to be shipped from China.

Books said being back in the United States made her realize, “We are privileged as Americans” to have had a place to evacuate to because “most Chinese people didn’t have a way out.”

She said she worries about her friends back in China and thinks about the home she left behind.

“It’s definitely hard being told to make something your home, and then you make it your home, and you’re just kind of thrown out of it without any consideration to how this will affect you,” Books said. “It’s just an adjustment, really is what it is, so I’m just kind of slowly getting back into my life.”