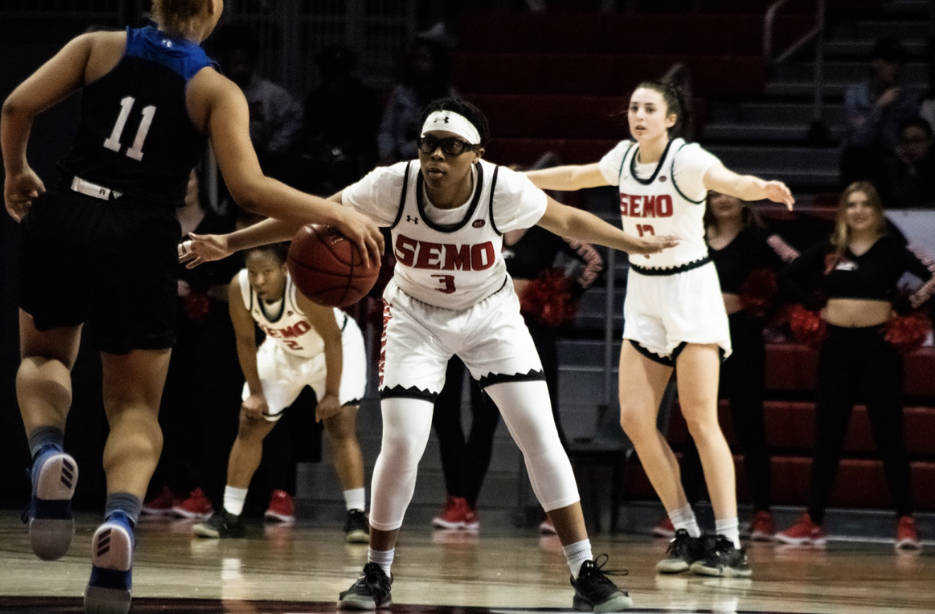 Freshman guard Roshala Scott guards an EIU player on Feb. 27 at the Show Me Center.
Photo by Ramond Buck

The Redhawks defeated Eastern Illinois 72-56 during their last game of the season on Thursday, Feb. 27 at the Show Me Center.

This win clinched the No. 3 seed for the Redhawks in the OVC women’s basketball tournament. The Redhawks will begin the first round of tournaments on Thursday, March 5 against the No. 6 seed, Jacksonville State University.

Harshberger, a forward for the Redhawks, was diagnosed with psoriatic arthritis this summer before her senior season. Harshberger has played for SEMO all four years, started in every game this season and left the Show Me Center on Thursday with 13 points and six rebounds.

“I feel like I'm at a point where I'm comfortable saying I feel so much better,” Harshberger said. “If it had to happen, I'm glad it started to happen right before the tournament.”

Harshberger said she couldn't be more proud of the team they have now.

“The game has to be won off of defense. That's what we had to have this game and that's what we’re going to take into the tournament,” Harshberger said.

Carrie Shephard ranks among the top NCAA women's basketball players in various categories. Shephard is ranked in steals and multiple sections for three-pointers attempted. She leads the OVC in all of these categories.

After transferring from Mizzou, Shephard faced an injury resulting in surgery. Shephard redshirted two seasons before returning to the court for the 2018-19 season.

“Knowing it was going to be my last, I put my all on the court tonight,” Shepard said. “Thank you to everyone who invested in me.”

Shephard beat the program record for 3-pointers in a single season two years in a row; she finished out last season with 73, and she now holds the record at 82 with one game remaining.

Harshberger and Shephard said their team serves each other on and off the court and they play with great energy.

The Redhawks fell 78-72 against UT Martin Saturday, Feb. 29 at the Elam Center in Martin, Tennessee.