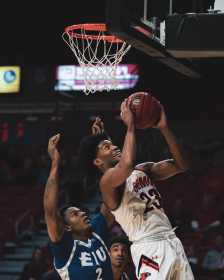 Sophomore Sage Tolbert goes up for two after an offensive rebound in the Redhawks final home game against EIU on Feb 27, 2020.
Photo by Jan Salmon

The Redhawks men’s basketball team came up short 72-70 in the final seconds against Eastern Illinois on Thursday, Feb. 27 at the Show Me Center.

Seniors Quatarrius Wilson and Skyler Hogan were honored at halftime for senior night in their last collegiate ride at home.

Quatarrius Wilson is a transfer from McNeese State University. He sat out last season for the Redhawks due to National Collegiate Athletic Association regulations and surgery on his thumb, causing him to be off the court until early August. Wilson hit double digits on Thursday for the fifth game in a row.

“I feel uneasy about the season. We just have to figure things out,” Wilson said of the 7-24 season. “This team just has to capitalize on turnovers; we’re capable.”

Hogan put up 14 points in his final home game. Hogan is a transfer from Embry-Riddle Aeronautical University, but he has been with the Redhawks for three years. He started 55 out of 59 games in his SEMO career and was the second leading scorer last season.

“It was fun playing with the two,” Tolbert said. “They both have a lot of experience and play hard.”

Hogan broke in the game with a long 3-pointer. Turnovers were what hurt Southeast most this game, as they led to a couple of missed rebounds and free-throws. Defensively, the Redhawks fought for loose balls and opponents’ missed baskets to finish with 42 rebounds over EIU’s 36.

Tolbert had a double-double with 16 points and 14 rebounds. Tolbert is the second leading scorer on the team behind sophomore guard Alex Caldwell. Tolbert, who is finishing his second season with the Redhawks, leads the team in rebounds this season with 191.

The Redhawks expected to finish in last place in the Ohio Valley Conference holding a 3-14 conference record. Men’s basketball will not qualify to participate in the playoffs this season.

“This is a rebuilding process. Right now, we just need to learn from experience,” Tolbert said.

The Redhawks fell 87-78 against UT Martin for their season finale on Saturday, Feb. 29 at the Elam Center in Martin, Tennessee.