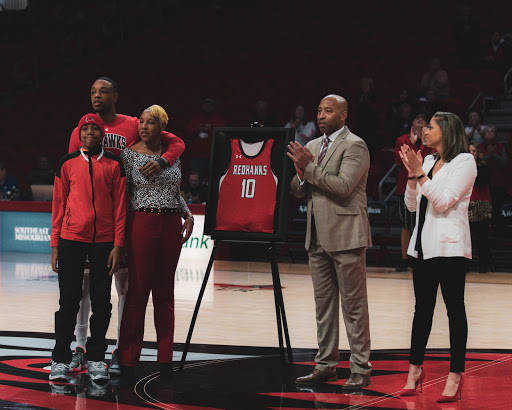 Rick Ray (tan suit) at the men’s basketball senior night on Feb. 27 at the Show Me Center.
Photo by Jan Salmon

On March 3, Southeast Director of Athletics Brady Barke announced Rick Ray has been relieved of his men’s basketball head coaching duties after five years with the program. He is on paid administrative leave until Apr. 30.

The announcement came after the Redhawks finished their season 7-24 overall and 3-15 in the Ohio Valley Conference — good enough for last place in the conference.

“At the end of the day, we simply haven’t had that on-court success that any of us want or feel like we can have,” Barke said.

Barke said the team is in a good position moving forward due to the timing of the announcement.

“The unique thing about our conference and institution is that we finish our season earlier than everyone else,” Barke explained. “From a timing standpoint, we feel like we are in a good position moving forward to attract our next head coach.”

Southeast will begin the search for their next head coach immediately, and Barke says they hope to find that person by the end of March.

“We need someone who can come in and be able to convey a vision and create a sense of unity within the program in terms of where they are headed,” Barke said.

Barke indicated the rest of the Southeast coaching staff still hold their positions on the team, and they are welcome to apply.

“I am willing to sit down and visit with them, hear about what their interests may be, what their vision would be and evaluate them just like anyone else,” Barke said.

The Redhawks joined the NCAA Division I in 1991, and since that time, the men’s basketball team has only made the NCAA Tournament once, in the year 2000.

The team has two signed recruits for next season and Barke said the coaching staff has reached out to them already.

“My hope with [the recruits] is that they give us an opportunity to identify the next [coach] and put some trust in us,” Barke said. “If, at the end of the day, that doesn’t work and they are not comfortable with that, then we will cross that bridge when we get there.”

The announcement comes on the heels of the women’s basketball team clinching third in the OVC and head coach Rekha Patterson receiving OVC Coach of the Year honors.

“The way she represents us and the community is second to none,” Barke said. “She has grown a tremendous amount during her time here and it's been exciting to watch.”

The women play their first round OVC Tournament game against Tennessee Tech on March 5 at 3 p.m.