“Humans of” project aims to bring humanity into the community 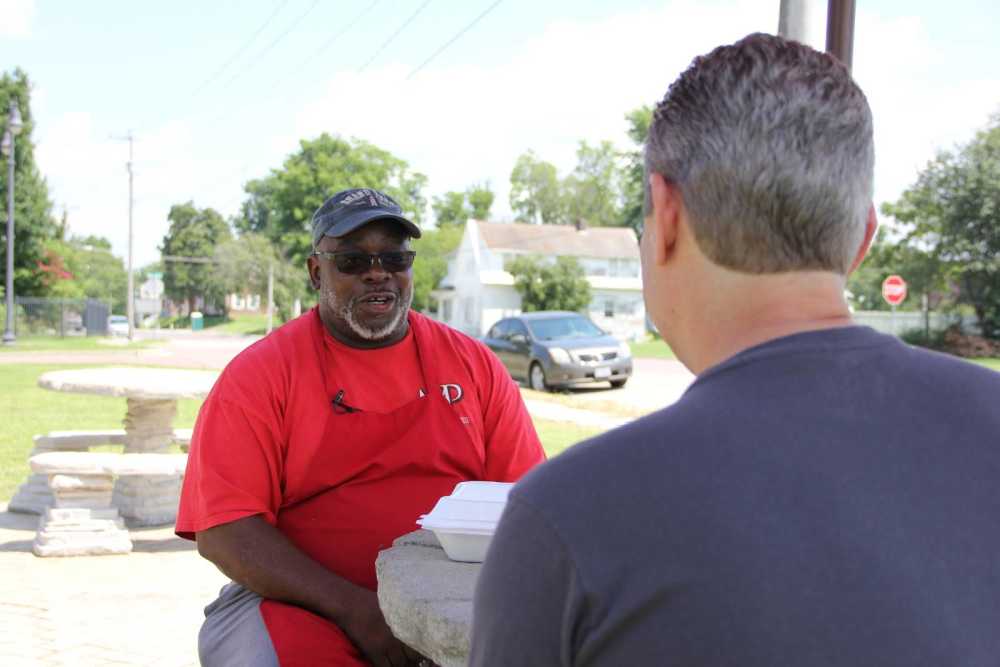 Founder of the Humans of Cape project, Chris Edmond, interviewing a member of the Cape Girardeau community.
Photo submitted by Darren Burfeld

According to the US Census Bureau, Cape Girardeau has 39,853 people living in the city limits. That 39,853 stories for Darren Burgfeld and the staff of Humans of Cape to meet and write about.

Inspired by the Humans of New York project, which began in 2010 by Brandon Stanton, and the Humans of St. Louis project started in 2014 by Linda Drew, Burgfeld was brought the project idea by founder Chris Edmond in February 2019, but the project wasn’t launched until that summer.

After working on the project with two other employees of digital production company Element 74, the website went live Aug. 1.

Eight stories launched with the website, all gathered by Burgfeld.

On Aug. 23, Burgfeld was let go from the company after it was bought by Red Letter Communications, and he knew his position would no longer exist.

“[Edmond] said, ‘You know, I'm going to keep paying you for two months for Humans [of Cape], and I want you to take this and run with it, really get it going and dig your heels in.’ So that's what I did,” Burgfeld said.

Edmond and Burgfeld took the approach of being something different than a lot of what is on the internet today —something that connects readers with their community.

The project is supported by local donors, whose money goes toward paying the writers, photographers and other content creators part of Humans of Cape, minus Burgfeld, who said he has yet to pay himself.

One of the employees is sophomore Pat Buck, who published his first story on Feb. 7 about a barber who sees his jobs as more than cutting hair.

“I've only done one so far, but the feedback and the engagement that it got really kind of proved the ability of the project to me, so I couldn't like the idea anymore because it's just so pure and genuine to get to know people that way,” Buck said. “And it gives me a very nice opportunity to talk to people in the community.”

The stories are all written anonymously from both the writer and the source. Burgfeld said he does this because they are telling real stories and not all of them are happy, and so a source may not want their name attached to it.

Burgfeld said most of the time the stories are found randomly, but each person he talks to is a person who has their own things going on in their life.

“I look at it, like, that person I talked to is somebody else's best friend or brother or whatever. So there's always some kind of six degrees of separation,” Burgfeld said.

The stories always have a photo to go along with it. Stories have included subjects that range in a variety of people such as a couple who has been married for 57 years, to a 911 operator who is legally blind, to a 16-year-old who loves the 1940s.

“Absolutely anybody can be a story, which I think it's important, especially as a student, to pause and explore,” Burgfeld said. “Just really look people in the eye and communicate with them, talk to people and explore the world around you.”

To read these stories or to learn more about The Humans of Cape project, visit humansofcape.com or find them on social media by searching for humansofcape.