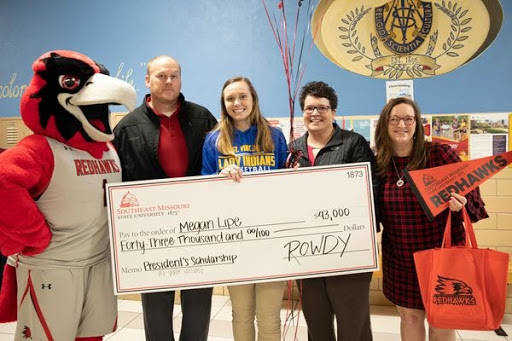 The $10,000 award covers $7,000 in tuition and fees and $3,000 for residence hall fees for students living on campus during their first year at Southeast. Students who continue to meet the scholarship renewal criteria may increase their award annually, totaling to $43,000 in scholarship value over four years, according to the university’s website.

Those who applied for admission and submitted the President’s Scholarship application by the Dec. 1 deadline were invited for an interview on campus in January. Students who applied must have met the eligibility requirements, which included earning a score of 31 on the ACT or a 1390 on the SAT and 3.75 cumulative high school GPA.

“That interview day is an opportunity for us to showcase the university to them, just as much for them to showcase themselves to us and how they would contribute to the community here at Southeast,” Southeast Director of Admissions Lenell Hahn said.

Hahn said the President’s Scholarship is Southeast’s most prestigious scholarship and is awarded to five students annually.

“It's very difficult to pick five students, but we are looking for students who have drive,” Hahn said. “They are students who want to make a difference.”

Students may combine their scholarship with the Redhawks Achievement Award and Endowed and Sponsored Scholarships, Hahn said.

“We are always seeking feedback, ideas and discussion on what's the best offerings that we can attract students to Southeast and see them be successful through to graduation,” Hahn said.

She said any kind of scholarship program has to have a budget to be able to fund the scholarship opportunities. Qualified students who apply, but are not chosen, automatically receive a $5,000 Copper Dome Scholarship, according to the university’s website.

Koontz declined to be interviewed as she had not decided whether to accept the scholarship at the time of publication.

Barlage is a senior at Murphysboro High School who plans to major in Animal Sciences with a pre-veterinary track at Southeast. She has a passion for helping animals and works as an intern at Wright Way Rescue Animal Shelter.

Barlage credits her work ethic to her supportive and motivated family.

“I wanted to be able to say that I kind of did that myself,” Barlage said. “That I could be proud of applying for the scholarship and earning the scholarship on my own and not having to take out loans or ask anything for my parents.”

She launched her own business, alongside her sister, at the age of 12, making and selling children’s clothing and accessories.

“I am the oldest of five, so not only do I have to do things that I myself [am] proud of, but I want to be able to show my siblings that it's possible to get good grades and still be involved in everything that I do,” Barlage said.

Eftink is a senior at Notre Dame Regional High School in Cape Girardeau who applied for the President’s Scholarship, believing he had what it takes to succeed.

“I thought, if I get it, I get it and that's awesome and if I don't this was just another learning experience for me,” Eftink said.

He is a member of his high school’s varsity cross country team and works alongside his father as a lawn caretaker for Eftink Lawn Service.

Eftink said his parents and faith in Catholicism have had a large impact on his life.

“It was like a culmination of all my success and hard work because it honestly felt like all those long nights doing homework and taking the advanced classes finally paid off in one final moment when she walked in with that big check,” Eftink said.

Heidbrink is a senior at Marquette Senior High School in Chesterfield, Missouri, where she is a deputy group commander of the Air Force Junior Reserve Officer Training Corps and the concertmaster with the Chamber Orchestra.

“I had a pretty emotional reaction to [earning the scholarship],” Heidbrink said. “It really does mean everything because I have worked super hard to get where I am.”

She said good role models helped her work super hard — her JROTC instructors pushed her to learn more about leadership and how to get involved.

“If someone is lucky enough to have JROTC at their high school, I would talk about it until I'm blue in the face to join because it really does break people out of their shell,” Heidbrink said.

Heidbrink plans to major in mathematical education, where she will pursue her passion to become a math teacher and help other students learn.

“I started becoming a leader in high school, then I learned that I liked teaching and helping and instructing,” Heidbrink said. “So that's what pushed me in that direction and then I just want to teach math.”

Lipe is a senior at St. Vincent de Paul High School in Perryville, Missouri, where she plans to begin her path to becoming a doctor at Southeast.

She said she always wanted her academics to reflect her character.

“I wanted to put forth the best effort and I knew that I would always be proud of myself as long as I tried, even if I didn't get it,” Lipe said.

Her passion and interests in service are inspired by her mom, who briefly studied at Southeast’s College of Nursing.

“There were nights she would be up late working, but I’d see her come home talking [about] her patients and just how much she genuinely enjoyed doing that,” Lipe said.

Lipe said she would like to return to a rural town post-medical school to encourage students who believe they are not to be able to get into medical schools or be successful because of the area in which they reside.