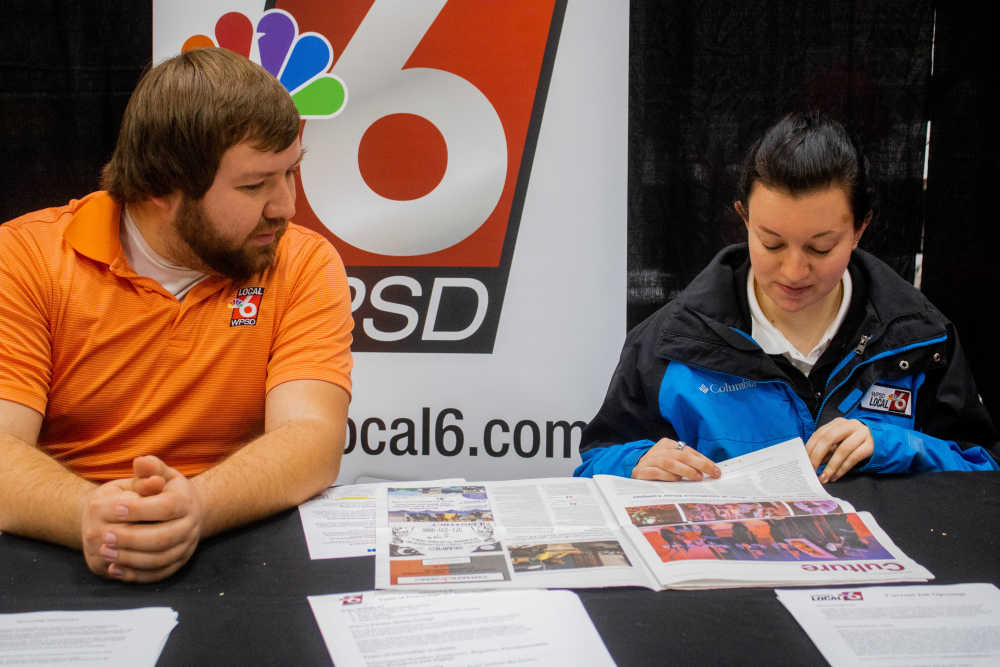 WPSD News Crew reading the latest version of the Southeast Arrow paper at the Career Expo, Thursday March 5th, 2020 at the Show Me Center in Cape Girardeau, Mo.
by Ramond Buck

More than 100 businesses sent representatives to the Spring Career Expo with job opportunities for Southeast students on Thursday, March 5.

Career Services at Southeast hosted the event which was held at the Recreation Center from 10 a.m. to 2 p.m. Thanks to flu and cold season concerns, the event was "handshake optional," as directed by a Career Services email notifying students of the expo.

Students who attended the event had the opportunity to talk with potential employers from different fields about job opportunities.

One of many students in attendance was physics major, Dylan Hill, who said prior to the event he was “looking for a job opportunity” in the physics field, but was “worried about the lack of physics-specific jobs” available at the fair.

One potential employer for students was Midwest Sterilization Corporation. Sasha Jackson, who represented the company at the fair, said they were hoping to find “good qualified candidates” from science-based majors at Southeast.

Jackson described Midwest Sterilization Corporation as a family-owned business that "likes to support the area," which is why the company attended Southeast's Career Expo.

Other employers seeking additions to the workforce included Michael Allred, superintendent of Portageville Schools. Allred said they were hoping “to get some new and exciting talent” to fill open teaching positions.

Sarah Hilton, who represented Southern Illinois Healthcare at the career fair, said they were looking to find qualified health care and I.T. majors, especially those originally from Southern Illinois.

While many students came to the career fair looking for a specific job, others were hoping to make some new connections and gain experience, such as Southeast student Josh Stinnett.

“I’m looking to get an internship and expand my networking abilities,” Stinnett said. “I don’t know what I want to do with my life right now, so I’m just trying to learn as much as I can.”