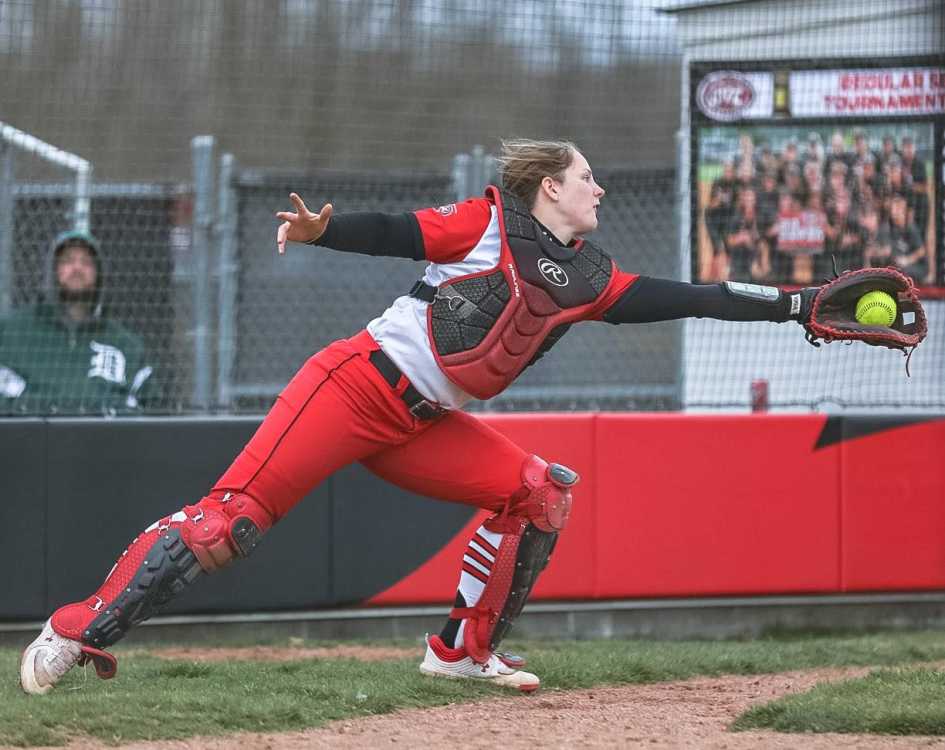 Senior Rachel Donald stretching out for a pop fly on March 1 at the Softball Complex.
Photo by Jan Salmon

After the NCAA’s historic decision to cancel or postpone all spring sports, the path for the Southeast softball team became unclear.

The team was coming off one of their most successful seasons in recent years where they won the Ohio Valley Conference and advanced to the NCAA Tournament. The Redhawks carried that momentum into this season where they went 12-5 before their remaining schedule was canceled.

At that point, junior pitcher Rachel Rook was seventh in the nation in ERA at 0.70, and senior Rachel Anderson was 23rd in the nation with a .480 batting average.

When Southeast coach Mark Redburn heard the season was canceled, the team was on a flight to Florida for a tournament. Redburn said all the news came so fast that it shocked him.

“I was sad for [the team], I hurt for them,” Redburn said. “All of a sudden things happened so fast that it went from not knowing what's going to happen, to ‘We’re canceling the entire season.’”

After the initial shock of the announcement, Redburn said he began thinking of what would happen to the seniors on the team.

“They had the rug pulled out from underneath them,” Redburn said. “They’re not going to have a chance to go out and compete and be repeating champions.”

On March 13, the NCAA announced they will extend eligibility for seniors or graduate students who had their season heavily disrupted or canceled by the coronavirus pandemic.

“Now things are back in the players’ hands, so if they want to come back for a fifth year they can,” Redburn said.

The team had eight seniors when the season ended, and Redburn said three are for sure returning, with a fourth player on the fence.

“Rachel Anderson, Ashley Ellis and Austine Pauly are the three who said for sure they are coming back,” Redburn said. “The fourth player could potentially be Rachel Donald.”

The seniors on the team were dominating on offense during the shortened season. Ashley Ellis and Rachel Anderson were both slugging above .870, and Ellis ranked 26th in the nation with eight home runs. Donald finished third on the team with a .367 batting average.

Donald said she never expected her senior season to end the way it did.

“You go through all your years thinking if your season does end early that it will be by a career-ending injury,” Donald said. “You would never expect it to be a global pandemic that ends your senior season.”

She said she would need to weigh all of her graduate school classwork and responsibilities before deciding to return for an extra year.

Although Redburn said the NCAA’s decision to allow players to redshirt is a good one, he believes it is going to create complications with future rosters.

“We don’t know what changes we are going to have to make to the roster now, and on top of it, what younger players might need to be redshirted as a result of having all these numbers,” Redburn said. “This will have a trickle-down effect for at least a couple of years.”

Redburn finalized the team’s schedule for next season during their newfound free time and began talking to some high school coaches and players for recruiting.

“Everything we would normally do has just been moved up a couple of months,” Redburn explained.

The team’s exhibition match against the United States softball team that was set for May 3 has been canceled, so the Redhawks won’t be back on the field until next spring.